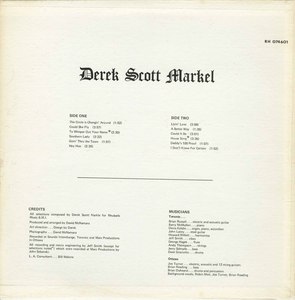 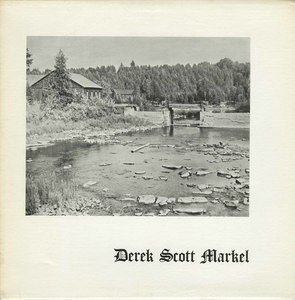 This rare Derek Scott Markel self-titled album represent's his only recording, containing 12 original compositions. It was pressed in extremely limited quantities. Nothing is known about this singer-songwriter.

The first side is more in the rural singer-song-writer folk composition vein. The second side has a bit more varying styles ranging from the folkish to folk-psych ("House Song") and blues ("I Don't Know for Certain").

The album was recorded at Sounds Interchange in Toronto, Ontario and Marc Production in Ottawa, Ontario. All recording and remix engineering was done in Toronto by Jeff Smith, except for "To Whisper Out Your Name" and "House Song", which were recorded by John Sebanski at Marc Productions in Ottawa. The Los Angeles, California, USA consultant was Bill Malone.

The album was released independantly on RH 074601 circa 1974.
-Robert Williston