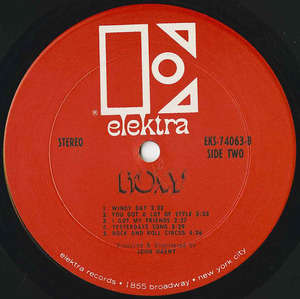 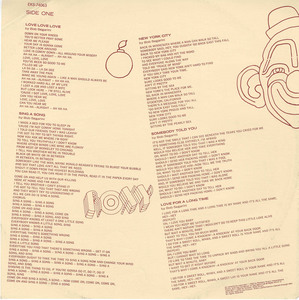 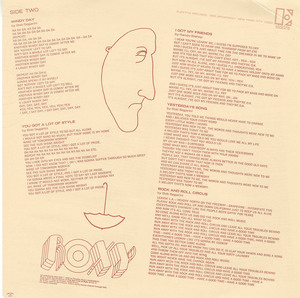 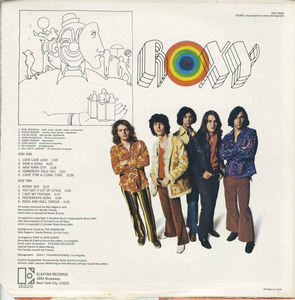 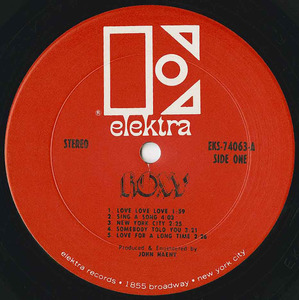 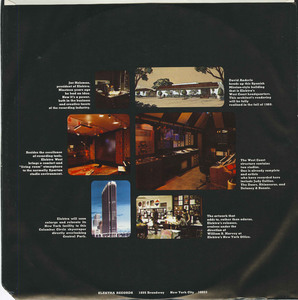 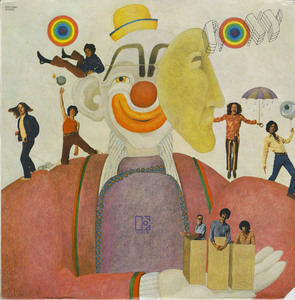 Roxy might be best known as the group from which a more widely known Elektra band emerged, as principal singer-songwriter Bob Segarini and Randy Bishop went on to found the Wackers, who issued three LPs for the label in the early 1970s. While the Wackers' albums (also reissued on CD by Collectors' Choice Music) often went in a Beatlesque pop direction, the earlier Roxy put a greater accent on rootsy if diverse rock of both the R&B- and country-influenced variety. Seeds of the Wackers, however, could be heard in Roxy's general back-to-basics approach at a time when much rock music was getting heavier, though Roxy never did get wide recognition before breaking up.

Segarini was already a young veteran of the California rock scene by the time Roxy came out in 1969. Growing up about 100 miles east of San Francisco in Stockton, by the mid-'60s he was in Us, who got as far as recording demos for the Beau Brummels' label, Autumn Records. Nothing came out on Autumn, however, and Bob moved on to the Ratz, who also included Gary Grubb; as Gary Duncan, he'd later play guitar in Quicksilver Messenger Service. Before Quicksilver got off the ground, however, Grubb/Duncan made an intermediate step with the Merced group the Brogues, with bassist Bill Whittington. Whittington and Segarini subsequently formed the Family Tree, whose early lineup included Mike Olsen -- the future Lee Michaels -- on keyboards.

The five-man lineup that recorded Roxy would also include fellow ex-Family Treer Jim De Cocq, as well as keyboardist James Morris and drummer John McDonald. The multi-talented Bishop contributed bass, guitar, keyboards, and vocals. Taking their name from the book From Vaude to Video, which had a big section on the Roxy theaters in the vaudeville circuit, they cut a demo, "Change My Mind"/"Bird." "Patty Faralla had gone over to work for [Elektra founder and president] Jac Holzman," explains Segarini, "so she told Jac about us. We went to L.A. and recorded these two songs at Elektra Studios with John Haeny, the engineer and producer, who also worked with the Doors [and] Jackson Browne. Jac heard it, called it some amazingly wonderful things, and signed us on the spot the day he heard the demos. That was late '68, early '69."

To prepare for the album, Haeny would come over to the band's house on Horseshoe Canyon Boulevard in Laurel Canyon, where they lived with their manager, John Frankenheimer. Of the ten songs on the LP, all but one were written by Segarini, the exception being Bishop's "I Got My Friends."

There is just one song on Roxy, in fact, that truly anticipates the Beatlesque pop directions that Segarini and Bishop would embrace shortly afterward in the Wackers. That's "Yesterdays Song" They managed to attract concert reviews in The Washington Post, which in April 1970 found Roxy's "sound not unlike that of the early Grateful Dead," and Billboard, who reviewed a show at New York's Bitter End the following month. While their debut gig at the Bitter End was soured by the theft of their truck and custom-made equipment, here they also showed they could play both hard and soft, with Segarini and Bishop opening the set as a duo with several numbers on acoustic guitars (including "Yesterdays Song") before being joined by the rest of the band.

The Roxy album, however, was not a big seller, despite a Rolling Stone review by the young Lester Bangs that hailed the band as "a ripsnortingly tight outfit from Los Angeles. Live they are enormously exciting, running through Fifties standards and their own originals with unflagging energy and with a sound that for all its fast rippling instrumental tradeoffs is always absolutely clear." Bangs saved special praise for the opening track, "a classic blast called 'Love Love Love,' a brilliant thundering anthem in the great L.A. tradition of the Byrds, Love, and Clear Light's 'Black Roses.' It's all over too soon at 1:59 and leaves us begging for more." "Love Love Love" was chosen as the first single off the album, and Segarini fondly recalls how it "was all over the radio in L.A. for at least eight weeks or so. That was exciting, driving down Sunset Boulevard hearing one of our tunes back to back with somebody really big." Another song from the LP, "Rock and Roll Circus," found some action in Las Vegas.

It wasn't enough action, however, to stall Roxy's breakup later in 1970. (The much more famous Roxy Music, incidentally, had to ask for permission -- which was granted -- to use their name due to its similarity to Roxy.) Despite constant live work and some encouraging critical reception, Segarini and Bishop wanted to go in a new direction and explore more pop-oriented sounds. That's what they did as part of their next band, the Wackers.
-Richie Unterberger