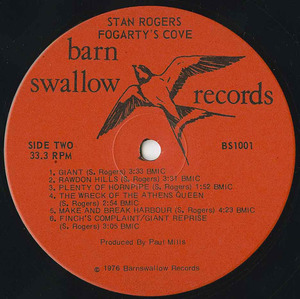 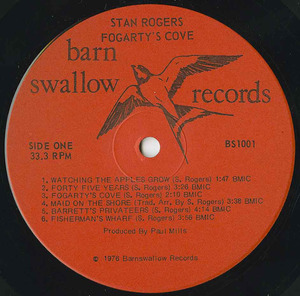 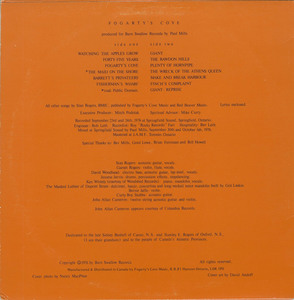 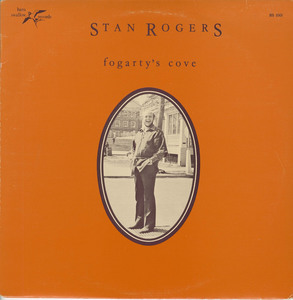 Stan's debut album of songs inspired by Nova Scotia, includes classics like 45 Years, Giant, and Make & Break Harbour. Rogers' earlier recordings (1970-5) included two singles for RCA, three songs included on the CBC broadcast album LM-416 and four on LM-436. He is also represented by one song on Best of Touch the Earth, LM-473, issued in 1981.

Stan (Stanley Allison) Rogers. Folksinger, songwriter, guitarist, b Hamilton, Ont, 29 Nov 1949, d Cincinnati 2 Jun 1983. As a boy he spent his summers in Canso, NS, where at five he began playing a guitar made for him by an uncle, Lee Bushell. The Maritimes would later serve as the subject or locale of some of Rogers' finest songs. At 14 he gave his first public performance at the Ebony Knight coffeehouse in Hamilton, presenting his own settings of verses by his grandfather, Sidney Bushell, and singing songs by the early US country star Jimmie Rodgers. He was later active in university folk circles during brief periods of study at McMaster University and Trent University.

By the time of his death at the age of 33, Rogers had established himself as one of Canada's most talented singer-songwriters (courtesy Canapress).

Rogers began his professional career in 1969, moving onto the Ontario and Maritime folk club and festival circuit, performing frequently on CBC radio and appearing in the mid-1970s on the TV shows of John Allan Cameron, Noel Harrison and Bob Ruzicka. He made his first tour of Western Canada in 1978. Accompanied initially by the guitarist Nigel Russell, he took Garnet Rogers as his principal sideman in 1973. In the next 10 years, the Rogers brothers had a succession of bassists, including Jim Ogilvie, David Woodhead, David Alan Eadie and Jim Morison.

Rogers' appearance at the 1975 Winnipeg Folk Festival has been cited as the turning point in his career; at the behest of the festival's artistic director, Mitch Podolak, Rogers recorded Fogarty's Cove, an LP of his own songs about the Maritimes, for Podolak's Barnswallow label. In 1978 Rogers established the recording company Fogarty's Cove Music; the label, co-owned by the Rogers brothers and managed by their mother Valerie, also issued LPs by Grit Laskin, Éritage and The Friends of Fiddler's Green.

Rogers returned to regional subjects for the LPs Northwest Passage (Western Canada) and From Fresh Water (the Great Lakes). His other albums included songs by Archie Fisher, Nigel Russell, Lee Bushell, Sidney Bushell and others, as well as Rogers' adaptations of traditional material. To this repertoire he brought a warm, reassuring baritone once described by Nancy White as 'a voice you can take a bath in' (quoted in The Globe and Mail, 2 Jul 1981).

His own songs, generally set in traditional formats, spoke eloquently for the many ordinary lives that, taken together, reflect the diversity of the Canadian experience. Rogers gave resounding voice to those who work closest to the land and the sea - to sailors, fisherman and farmers - as well as to the dispossessed and the disaffected. His themes were universal - honor, loyalty and hope - but his terms of reference and his images were evocatively specific and his sense of Canadian history equally poetic and heroic.

Of Rogers' titles, nearly 100 in total, the best-known are 'Barrett's Privateers,' 'Make and Break Harbour,' 'The Mary Ellen Carter,' 'Northwest Passage' and the love song 'Forty-Five Years'. Several of his songs were heard in the CBC-radio folk opera So Hard to be So Hard in 1975; still another, 'Harris and the Mare,' became the basis of a CBC radio drama produced in 1982. His songs have been recorded by more than 25 other artists and groups including the Battlefield Band, Eric Bogle, John Allan Cameron, Margaret Christl, Mary O'Hara, Peter Paul and Mary, Raffi and the Tannahill Weavers. Lyrics and music for the songs on his first four LPs were published in the folio Songs from Fogarty's Cove (Ottawa Folklore Centre 1982).

At the time of his death, Rogers was beginning to attract attention beyond the traditional folk audience in Canada and had emerged on the folk circuit internationally. He made his US debut in 1978 and subsequently appeared widely there in folk clubs and at festivals, enjoying particular popularity in the New England area, Chicago and Los Angeles. He also performed in Scotland as Nova Scotia's representative at the Gathering of the Clans in 1981. Rogers was en-route home from an appearance at the Kerrville Folk Festival in Texas when he died in a fire aboard an Air Canada DC-9 at the Greater Cincinnati Airport.

A film documentary of his career, One Warm Line, was first telecast by the CBC in 1989.