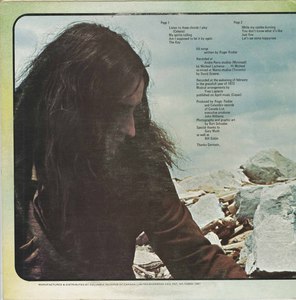 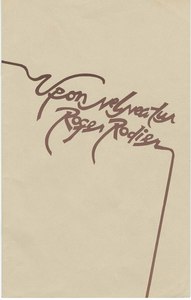 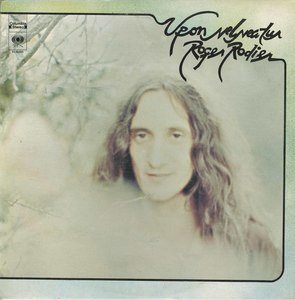 this is a monster of a rare Canadian Folk psych classic. Rodier has been compared to a drugged out Nick Drake, but he has a naive charm and some beautiful songs. It came with the a rare 20 page booklet of lyrics.

There were two pressings - the earlier pressing has the red label with 360 Sound white text; the second pressing came with the red label with the yellow text. Both pressings used the same vinyl, meaning the 360 press isn't on heavier, thicker & sturdier vinyl as is the case with most 360 presses. It may even be possible that both were in fact issued at the same time and the labels may have just varied between pressing plants during that transitional period. Every other detail is the same even including dead wax/matrix stamp/numbers.
-Tom O.

Rodier was weaned on Beatles records in Montréal in the 1960s. After playing with The Mockers and the Mike Jones Group, he cut several weird yet disarmingly pretty French-language psychedelic folk singles with names such as "L'Herbe" ("The Grass").

Roger Rodier then put out an obscure album on Columbia in 1972, Upon Velveatur, that was very much in line with the folk-rock-oriented singer/songwriter trends of the era. It was at least as much indebted to British sounds from that genre as North American ones, however, with its gentle breathy vocals, subdued melancholy, and combination of predominantly acoustic guitars with subtle strings and some female backup vocals. Prior to the LP, Rodier had issued a couple of singles on the local Montreal label Pax, the first of them sung in French. Despite getting praised in Rolling Stone by Lester Bangs for its "timeless grace," Upon Velveatur got little exposure when it was issued in autumn 1972. Although he did start work on a second album for Columbia in early 1973, it wasn't finished, and Rodier left music a few years later without having released anything else.
-Allmusic.com

Although Roger Rodier is Canadian, this rare early-'70s singer/songwriter album sounds almost as if it could have been made in Britain, such is its similarity to folk-rock recordings of the time by the likes of Al Stewart. In fact Rodier faintly resembles Stewart vocally, and has an inclination toward gentle, slightly sad songs mixing acoustic guitar, orchestration, and female backup vocals (a combination used by Nick Drake on Bryter Layter). But his voice, as a singer or composer, isn't nearly as distinctive as that of, say, Stewart or Drake. Upon Velveatur is a passable effort in this tributary, Rodier's mildly lisping singing evoking both delicate sensitivity and a certain sense of detached observation. He and his songs are a little troubled, but not distraught, with the exception of "While My Castle's Burning," whose angrily strummed guitars, dramatic strings, and vitriolic vocals project muted rage, albeit of a fairly inarticulate kind. Its mixture of placidity and brooding reflection might casually recall Drake, but Rodier wasn't working on as high a level. [The 2006 CD reissue on Sunbeam adds five bonus tracks, four taken from 1969 singles, the other from the 1972 non-LP B-side "Easy Song." Generally speaking, these are less ornate than the material on Upon Velveatur, though they have a similar light folk-rock base; "Have You?" sounds a little like George Harrison's folkiest early solo material, and the two songs from the first 45, "L'Herbe"/"Tu Viendras," are sung in French.]
-Richie Unterberger, All Music Guide

Fragile folk-rock of the highest order. This is really an excellent album, one of the finest acid folk items, and certainly a record that deserves more attention.
-lysergia.com

Super rare Canadian loner folk album from 1972 with beautiful sweeping orchestration and some tasty West Coast guitar breaks. With a feel that recalls Nick Drake, Axelrod-style arrangements and a fragile, haunted quality, this lost gem has to be heard to be believed.
-Freak Emporium

Stoned is the way of Velveatur's walk, and the odd lash of stinging guitar is sure to keep you on your toes. All who hear this album fall under its charm.
-soulstrut.com

Rodier was a Montreal-based, Anglophone singer-songwriter whose twee yet slightly sinister style pulls the listener down into a rabbit hole of unexpected pop arrangements, into one of the most bipolar albums every made. This fragmented format is definitely not for everyone, but both styles are so well realized that it’s well worth the risk. Starting off hushed and whispery, the 1972 LP soon turns tough and anxious with the choir-backed anthem of betrayal “Am I Supposed to Let It By Again?” before slipping back into seductive intimacy in adoration of (shades of Jeff Mangum) Jesus Christ, and the heavy guitars and anguished, giddy shrieks of “While My Castle’s Burning.” Five strong bonus tracks flesh out Rodier’s versatility, which includes bubblegummy sunshine pop and sweetly spooky pop tunes in French. A very striking rediscovery, really excellent stuff.
-kim, lostinthegrooves.com

“We haven’t been this excited about a rediscovered psych-folk classic since Red Hash by Gary Higgins. Nobody knew what to expect from the cover photo of Rodier, (looking a lot like Geddy Lee) staring out at us from a hazy meadow with the strange enigmatic title: Upon Velveatur. It is a dreamy French-Canadian psych-folk pop suite that varies from hushed mystical songs lushly orchestrated with strings and theremin to more rock-oriented numbers featuring stinging electric guitar. Lazy comparisons to Nick Drake are inevitable, and if we must go there, Upon Velveatur is closest to Bryter Later in terms of feel and production value. But Rodier can also sound like John Lennon with Cream as the band, Fleetwood Mac on backing vocals,and produced by Roger Nichols and his Small Circle of Friends all on one song! We get the feeling that maybe some folks like Neil Halstead were onto the sounds of Rodier as we were listening to some Mojave 3 and could totally hear Rodier’s voice and stylings being transmitted by Mr. Halstead. Featuring bonus singles from an earlier psych folk project, Rodier-Gauthier, and liner notes from the man himself. Totally Recommended!”
-Aquarius Records.