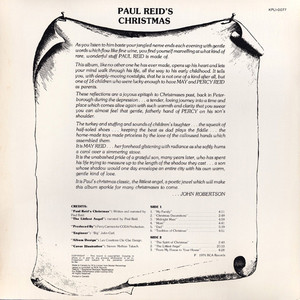 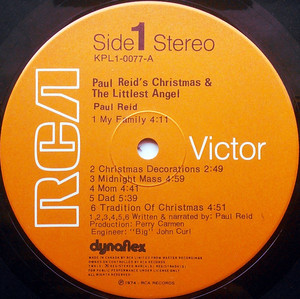 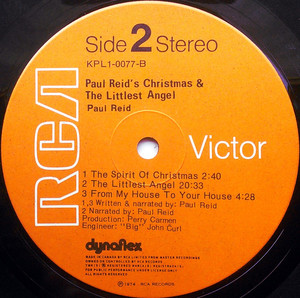 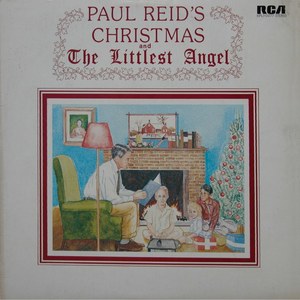 “A Paul Reid Christmas” has become a bit of an institution in the cities where Paul Reid was on the air.

The live show revolves around Paul’s memories of Christmas while growing up as one of sixteen children. He talks reverently of his Mother and Father and how they made Christmas so special even though they were poor.

He reads other pieces as well.

The origins of the carol “Silent Night”
A sermon by Peter Marshall entitled, “Let’s Keep Christmas”.
And the favourite children’s story. The Littlest Angel”, by Charles Tazwell.

He talks bout his favourite Christmas Carols and plays them all.

While Paul was alive, in the true Christmas spirit, he gave the show to anyone who wished to broadcast it. As a result it played in a number of countries and on the Armed Forces Network. We were told it also played during the war in Vietnam.

It is worth noting that he did most of show live every year. Some pieces were taped to give him a break. Some years he had trouble finding something new to add or he didn’t feel the Christmas spirit. (It aired the first week of December most years.) The radio station staff and librarians would help. When Dad would go in to prepare for the show, he would find the studio darkened with only candles lit, a decorated Christmas tree in the corner and other decorations. There were usually messages from staff and most importantly his kids and family, wishing him a Merry Christmas. To him, Merry Christmas meant “I love You”.

Doing the annual Christmas show was the only time I ever saw him nervous for a show. He would get uptight usually mid November as the broadcast date would approach. We kids would do our best to stay out of his way but would all wish him a Merry Christmas when he left.

I have listened to the show hundreds of times over the years and it never seems to age or get stale. It is truly a timeless show that appeals to all ages, races and religions.

Over the years, I have received countless, calls, letters and e-mails from people all over North America, saying how much they and their families have been touched by the show and how they finish writing their cards, doing their Christmas baking or wrapping gifts to it. It has been a part of a Christmas tradition in thousands of families and remains Paul’s most enduring legacy.

As you listen to him baste your jangled nerve ends each evening with gentle words which flow like fine wine, you find yourself marveling at what kind of rare, wonderful stuff PAUL REID is made of.

This album, like no other one he has ever made, opens up his heart and lets your mind walk through his life, all the way to his early childhood. It tells you, with deeply-moving nostalgia, that he is not one of a kind after all, but one of 16 children who were lucky enough to have MAY and PERCY REID as parents.

These reflections are a joyous epitaph to Christmases past, back in Peterborough during the depression... a tender, loving journey into a time and place which comes alive again with such warmth and clarity that you swear you can almost feel that gentle, fatherly hand of PERCY on his son’s shoulder.

The turkey and stuffing and sounds of children's laughter... the squeak of half-soled shoes... keeping the beat as dad plays the fiddle... the home-made toys made priceless by the love of the calloused hands which assembled them.

It is MAY REID... her forehead glistening with radiance as she softly hums a carol over a simmering stove.

It is the unabashed pride of a grateful son, many years later, who has spent his life trying to measure up to the length of the shadow they cast... a son whose shadow would one day envelope an entire city with his own warm, gentle kind of love.

It is Paul’s Christmas classic, the Littlest Angel, a poetic jewel which will make this album sparkle for many Christmases to come.
-John Robertson

Please forward any inquiries, including the purchase of this album to: