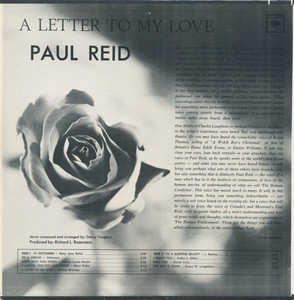 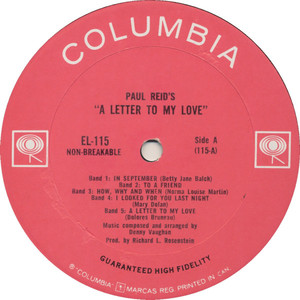 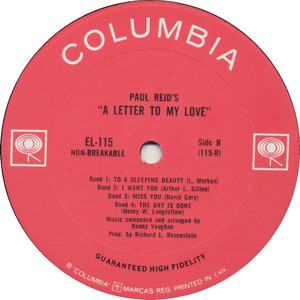 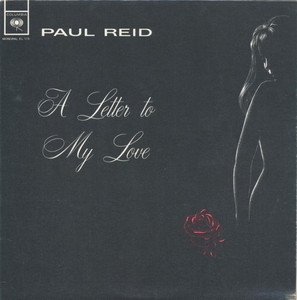 A Letter to My Love

LINER NOTES
The art of reading to others for their pleasure... (yes, one may truthfully say `comfort` too) is a skill few possess. It is not an acquired skill, nor a taught one. Professionalism can only add deft touches to natures endowment. This is the best introduction to Canada’s Paul Reid, to whose voice you will listen on this recording. All the more difficult and therefore more deserving of the accolade of professionalism in its highest meaning, is that Paul Reid’s readings (as you will hear them) were not intended in the first instance for visible audiences whose reactions to the performer can judge for himself as his voice speaks.

These recordings result directly from the requests of innumerable people for something more permanent to hear and re-hear, than a gentle voice coming quietly from a microphone in a sound proofed studio miles away, heard then gone.

One thinks of Charles Loughton, or perhaps Ustinov....but these, in the writer’s experience, were heard “live” and associated with theatre. Or you may have heard the remarkable voice of Dylan Thomas, telling of “A Welch Boy’s Christmas”, or that of Britain’s Dame Edith Evans, or Emlyn Williams.

If you can close your eyes, lean back restfully in your armchair, then the voice of Paul Reid, as he speaks some of the world’s best loved poetry... and some you may never have heard before... will bring you perhaps what none of these others have brought you, but also something that is distinctly Paul Reid... the voice of a man which has in it the instincts of compassion, of love of the human species, of understanding of what we call “The Human Condition”.

This voice has meant much to many. It will, in this permanent form, bring you something indescribable... not merely a soft voice heard on the evening air, but a voice that will be yours to keep, the voice of Canada’s and Montréal’s Paul Reid, with its gentle timbre, all a man’s understanding and love of great words and thoughts, which themselves are expressions of “The Human Predicament”.

These are the things you will hear, albeit subconsciously, in the voice of Paul Reid.

It is interesting to note that the album cover created quite a stir when it was released. While some people thought it was too provocative to be sold, most people embraced the artwork, which echoed the contents of the disc. Paul loved the dark cover, the dusty rose and the sensuous nude on the cover. The controversy was short lived as the album sold well.

The album was re-issued in 1983 by the friends of Paul Reid to the benefit of his wife June. Once again it sold very well thanks to publicity generated by his long time radio station CJAD. It was issued under the Globe Special Products label and the liner notes were re-written by Ralph Lucas.