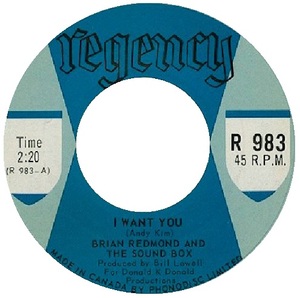 I Want You b/w Boogaloo Up Bord Du Lac

Second 45 and great follow up to their Psychedelic "Warm Your Mind & Soul". A-side was written by fellow Montréaler, Andy Kim. This was the band's last record and was produced by CFOX deejay Bill Lowell for Donald K Productions (same people that booked Simple Simon & The Piemen). Brian Redmond would later record with Martin Martin.

Boogaloo Up Bord Du Lac was written by Michel Dugas. The song was used as a music bed for radio commercials and promos. It was written about a residence at 2401 Chemin Bord Du Lac, Ile Bizard (demolished in the late 70's). We rehearsed there for years in a small room, with an old cast iron stove to keep sort of warm in the winter. Our old 1961 Ford Econoline van parked in the front and across the street was a wooden Bell pay phone, which was our official office... back then pay phones could actually receive calls, so when a booking came in, I would run across the road from 2401 and answer the phone... (of course today no one would know what a pay phone was).

The tune reflected a tough lifestyle, there was an old rock/stone fence across the street on a property bordered by 1iere Ave and Bord Du Lac, where the" young ladies" would sit and listen to us play. It was a very different time in Québec... the "pill" was introduced around 68/69.

What went in that house would scare most people... a crazy time... QPP/army raids looking for Paul Rose during the tough times... gangsters following us home from some club in downtown Montréal to try and steal our pay... guns... parties... etc… etc... So this tune which was a flip side, did have a story.

7500 screaming kids, it was surreal for a group of 18-19 year old musicians, not the Forum, but quite a night for us. I will remember forever meeting Gary Puckett in a dressing room. He was really a nice guy, they were in the middle of selling millions of hits... and Gary was an amazing guitarist, despite fronting the Union Gap. A tough start for Andy Kim as his band left him hanging with a musical screw-up... they had to stop.. .BUT he was a real "Pro"... restarted the song and was fine... in those days you would be deaf at the end of the night... it was a thrill for us... a group of kids in a Garage Band to open for two artists that went on to sell....."millions and millions" of records as the 70's hit us.

Today whenever Sugar Sugar is requested (osti!) for a cake cutting, I just smile... Archies, Andy Kim, Gary Puckett... a moment in time wayyyyyy back in the day.

To my best recollection, Phil Vyvial, played guitar and did back up vocals with radio CFOX DJ Bill Lowell. Michel Dugas also on guitar... Bill and Phil really should have done the lead vocal, they were excellent... however I sang it and did the drum track with a very weird sound which we thought was cool... (it wasn't ) but kids liked it... we recorded it in a studio in the Cote-Des-Neiges area of Montreal.