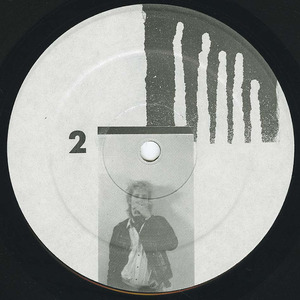 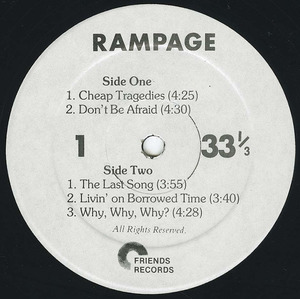 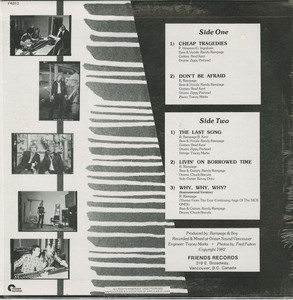 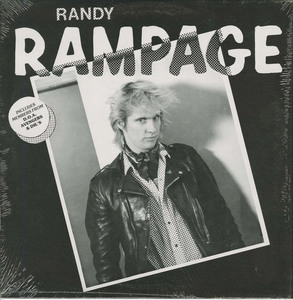 Before going on to Annihilator, DOA's original (and present) bass player made this album with help from friends Brad Kent, Chuck Biscuits, Zippy Pinhead, Tracey Marks and Benny Doro.

'He was completely selfless, as a person and as a performer,' says partner Susanne Tabata

As the original bassist of influential Canadian punk outfit D.O.A., the peroxide-blond headbanger lived up to his musical moniker on stage, thrumming his instrument as if the high-octane songs were coursing through his veins.

It sometimes seemed like he spent most of a performance in mid-air, whipping the crowd into a frenzy with his acrobatic stunts as he leapt off of a stack of speakers, launched into the splits or bounced with abandon to beat.

But those closest to Randall Desmond Archibald, as the musician was legally known, say he will be remembered as a hell-raiser with a "heart of gold."

"Randy was a founding member of the original punk scene in Vancouver. He lived for the moment, and he gave everything for the moment," said Susanne Tabata, his partner of more than a decade.

"He gave of himself, and he was completely selfless, as a person and as a performer."

"Randy would be known as a pioneer of the scene and well known around the world too," Keithley said. "(He was) the wild man of punk rock. A crazy guy that lived life hard and took a lot out of it."

Archibald's reign as Randy Rampage began in 1978 after he responded to a newspaper ad calling on musicians to join Keithley's new band. There was only one caveat, Keithley recalled: "No wimps need apply."

Hardcore
While the fledgling punk group had no wimps, it did have two too many drummers, said Keithley. So he took up the guitar and became the lead singer, while the bass was a natural fit for Archibald's sense of rhythm.

Touring across Canada and the U.S., D.O.A. combined obstreperous vocals, onstage antics and politically inflected lyrics to hone an uncompromising sound that distinguished the band from the punk styles of New York or London.

"No one had really thought about using that word for music," said Keithley. "That kind of sprung that whole genre of music."

Annihilator and The Clash
Keithley said his relationship with Archibald could at times be contentious, and the bassist parted ways with the band several times.

During these leaves of absence, Archibald served as the lead singer for thrash-metal band Annihilator, and briefly teamed up with The Clash as the runner on their American tour, Keithley said.

"We had our differences. We didn't get along all the time," said Keithley. "That doesn't stop the guy from being like a friend and brother. We kind of grew up together on the road."

Books, cooking and swimming
Tabata said she came to know Archibald during her days as a radio DJ in the 1970s.

She decided to feature D.O.A. in a documentary she was directing about Canada's punk scene, portraying the band's body of work as the "cornerstones that laid the foundation for hard-core punk in the world."

But as her relationship with Archibald deepened, she found there was much more to the man than his punk persona.

She learned that he read three books a week, was trained as a sous chef at Benihana and used to be a competitive swimmer.

Longeshoreman
He was a longshoreman of 32 years, and even after an injury left him with chronic pain, she said he would still go out of his way to help his "brothers and sisters" on the docks of north Vancouver.

"I always felt as though Randy would try to give people wings when he might have had a broken wing himself," she said.

"The odd thing is that despite his ... rage-against-the-machine, burning-in-hell exterior, I'm pretty sure Randy's an angel."
-Adina Bresge, The Canadian Press, Aug 25, 2018