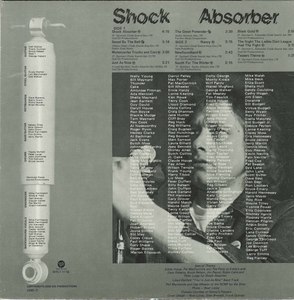 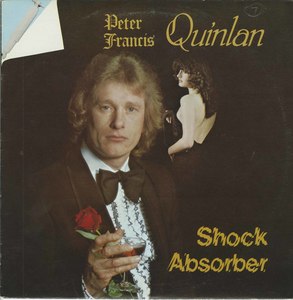 Peter Francis Quinlan released this terrific Newfoundland recording of folk rock synth with the help of THE who's who of Newfoundland recording artists of the day, not to mention the more than 200 other folks who likely contributed, as listed on the back of the album. Shock Absorber was released on what could be the-most-Newfoundland of Production companies - Cod Oil Productions. 8 of the 10 compositions were written by Peter Francis Quinlan. His best known song "The Night the Ladies Dart League Had the Fight", was a comedy ballad about The Bull's-Eyes and Debbies hucking darts at eachother down at Lucky's Place - the youtube video has more than 6,000 views. The song "Newfoundland" is the most psychedelic song ever written about the Rock. "Shock Absorber" is a Newfie synth rocker definitely worth the price of admission. Black Gold sounds as if it was written just the other day (except oil was at $12/bbl, gold went up from $160 to a whopping $200, and the Canadian dollar dropped from 94 cents to 86 cents against it's US$ counterpart). He returned in 1997 with his only other effort, Take Me Back to Newfoundland. Later on, he was co-executive producer for the "Singers For Fishermen" CD.
-Robert Williston