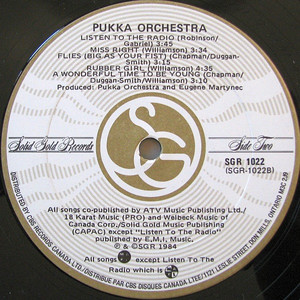 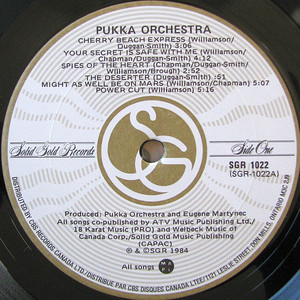 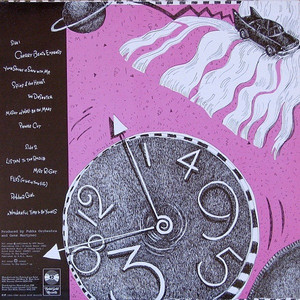 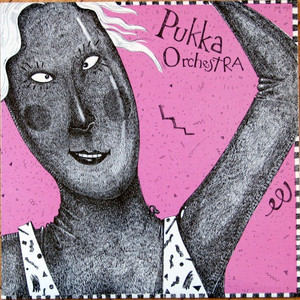 The Pukka Orchestra (a Hindu term meaning "first rate", "permanent", "genuine") was formed in Toronto during 1979 and released a humorous independent single "Rubber Girl" in 1981.

They signed to Solid Gold Records shortly after with their self-titled debut in 1984 and featured the radio hit "Listen To The Radio" which was written by Tom Robinson and Peter Gabriel under its original title "Atmospherics". Two other well received singles followed.

Their live shows featured the core line-up of Chapman, Duggan-Smith and Williamson with a rotating base of Queen Street musicians sometimes numbering 10 or 11 on stage at a time.

What appeared to be a promising future was cut short when Williamson developed kidney problems and moved to Scotland to be with his family. Lightening dealt a second blow when their record label, Solid Gold, went bankrupt.

In 1984 members of the Toronto community like Robert Priest, Colin Linden and Gwen Swick rallied to Williamson's aid for emergency living expenses by holding a benefit concert at The BamBoo club which raised $5000.

Williamson eventually received a kidney transplant and was well enough for The Pukka Orchestra to carry on to release a 4 song EP on A Major Label in 1987. Williamson health, still fragile, was unable to continue with the band and the Pukkas disbanded, officially in 1988.

In 1992, with a FACTOR grant in hand, The Pukka Orchestra was able to record again for A Major Record label and release a new 10 song album in 1992 which they self-produced.

Graeme Williamson lived in Glasgow where he wrote his first novel; Williamson, Duggan-Smith and Chapman continued to work together as Neotone and in 1996 released a CD called 'Oh My' featuring Glenn Olive on bass.

The band reconvened in 2008 to record a concept album under the name Autocondo.