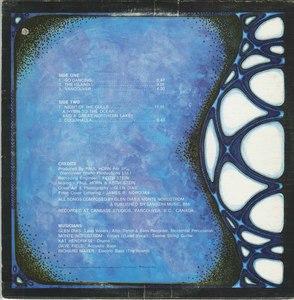 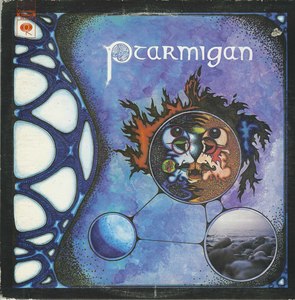 Vancouver, and, by extension, the beautiful province of British Columbia (BC), Canada, has been discovered and re-discovered many times in its history, both before its entry into Canada in 1871 and after. I made a personal acquaintance in 1980 as a tourist, but its resurgence after the Expo 86 world fair boosted the economy such that it actually became possible to find work and a laid back lifestyle to go with it, and there I lived from 1988-1996. Hence this semi-precious jewel from the prehistoric days is of particular interest to me.

PTARMIGAN's sole recorded output is loosely dedicated to BC at a time when it was the province of the few chosen ones, but the inspiration for the dreamy vocal and woodwind passages and the hypnotically strummed guitars is readily apparent. The sense of isolation from the rest of the continent is profound in the introspection of the lyrics and every spare note wrenched from these idealistic musicians. Granted there was little space for this type of exploration in 1972 unless you were in Quebec, but I suspect Ptarmigan would have been a one-off anyway, as this disc comes off as a bit of a cathartic project for the benefit of its participants, while still being anywhere from slightly to mightily entertaining.

A ptarmigan is actually a common northern Canadian bird in the grouse family that was overexposed in the little television interludes from the Canadian Wildlife Service in the 70s. Clearly the same fate did not await the group, but I do recall hearing some of their album after the fact, although the where and when remain shrouded in the haze of youth. Ultimately the album succeeds best in song format, in their tributes to Vancouver Island and the city of Vancouver, in which they take on a persona truly their own. The vocals are highly emotive yet oddly trance-like. "Go Dancing" is a bit too west coast for my tastes, like JEFFERSON AIRPLANE meets the YOUNGBLOODS, but you may enjoy that. Native American sounding flutes and spoken parts conjure better known artists who appeared decades later like JERRY ALFRED AND THE MEDICINE BEATS, But when the group goes for the more improvisational sounds akin to early TULL or nigh krautrock on "A Hymn to the Ocean..." and the interminable closer "Coquihalla" that they reveal their inability to break out of a fairly narrow emotional and musical range, even when the alterations should be drastic.

Ptarmigan's sole and short flight (these types of birds don't fly too well anyway) is nothing to pump your wings over, but if you have a penchant for the laid back and meditative style with little more than flutes, acoustic guitars, vocals and percussion, then you could do worse than flush this one from its hiding place.
-Ken Levine

Album was recorded at CanBase (Mushroom) Studios in Vancouver, Canada.