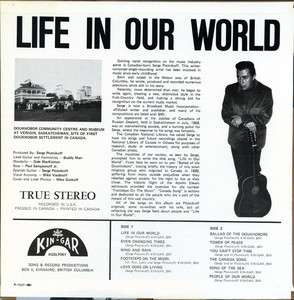 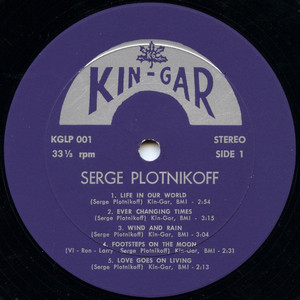 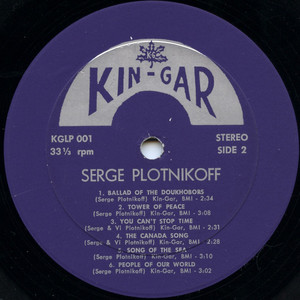 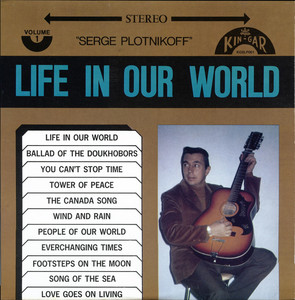 Gaining rapid recognition on the music industry scene is Canadian-born Serge Plotnikoff. This writercomposer-singer-recording artist has been involved in music since early childhood. Born and raised in the Nelson area of British Columbia, he wrote, produced and recorded numerous selections while still in his teens.

Recently, more determined than ever, he began to write again, creating a new, distinctive style in the Folk-Country field, and making a strong bid for recognition on the current music market. Serge is now a Broadcast Music Incorporated affiliated writer and publisher, and many of his compositions are listed with BMI.

An appearance at the Jubilee of Canadians of Russian Descent, held in Saskatchewan in July, 1969, was an overwhelming success, and a turning point for Serge, where the response to his songs was fantastic. The Canadian National Library has asked Serge to have his songs and future recordings placed in the National Library of Canada in Ottawa for purposes of research, study or entertainment, along with other Canadian artists.

The injustices of our society, as seen by Serge, prompted him to write the title song, "Life In Our World". From here he went on to pen "'Ballad of the Doukhobors", tracing briefly the history of this small religious group who migrated to Canada in 1899, suffering from many outside prejudices when they rebelled against society for the right to live as they chose. The historic flight of the Apollo Eleven astronauts provided the incentive for the number "Footsteps On The Moon". "Canada Song" is written and dedicated to all the people who are a part of the mosaic of this vast country.

All of the songs on this album are Plotnikoff originals, some co-written with his wife, but all reflecting the way Serge feels about people and "Life In Our World".