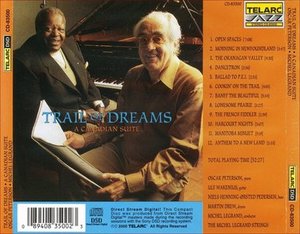 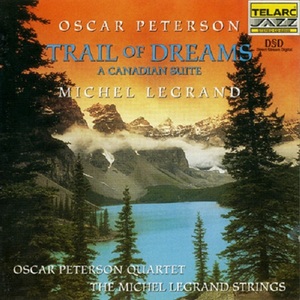 Trail of Dreams: A Canadian Suite

Trail of Dreams: A Canadian Suite is hardly a typical Oscar Peterson album. This time, the Canadian pianist doesn't play any standards and doesn't take a bop-oriented approach; in fact, Trail of Dreams isn't a straight-ahead jazz album but rather combines jazz with elements of pop, classical, and symphonic music. Recorded in April 2000, this CD finds Peterson joining forces with Michel Legrand, who conducts a lush 24-piece string orchestra. Legrand is famous for composing gems like "You Must Believe in Spring" and "Once Upon a Summertime," but the French icon doesn't do any composing on this album; his role is strictly that of a conductor/arranger, and all of the writing was done by Peterson himself. The compositions were meant to paint an aural picture of Peterson's native Canada; they were inspired by places that range from Quebec in eastern Canada to British Columbia in the western part of the country. The music is generally likable, and even though Peterson doesn't have a great deal of room to stretch out and improvise, he manages to get in some decent solos here and there. Nonetheless, Trail of Dreams never pretends to be a hardcore bop date, which is why it's pointless to judge the CD by bop standards. This release isn't recommended to bop snobs, although more broad-minded listeners will find it to be an interesting, if imperfect, departure for the veteran pianist.
-Alex Henderson, AllMusic

As musicians mature, it seems they return to their original sources of musical inspiration, as David Sanchez did with Melaza or Danilo Pérez did with Motherland or Gonzalo Rubalcaba did with Antiguo. Well, Oscar Peterson attained maturity quite a while ago, and he wrote about his native country, Canada, in the 1960’s when he recorded Canadiana: Fields Of Endless Day. While Peterson’s earlier musical tribute to his country addressed the topic of Canada’s refuge for blacks escaping slavery through the Underground Railway, Trail Of Dreams: A Canadian Suite abandons issues and “merely” revels in the trans-continental grandeur of the country of his birth.

The occasion for the writing and recording of Trail Of Dreams was a Canadian celebration that commissioned works by dozens of Canadian artists, including Peterson. His suite premiered in April at Roy Thomson Hall in Toronto as his trio was backed by a 24-piece string orchestra led by celebrated composer and arranger Michel Legrand (after just one rehearsal!).

Trail Of Dreams doesn’t present the piano colossus of boundless energy that left enthusiasts in awe in the 1950’s and 1960’s. In spite of Peterson’s well-documented stroke that left him with the weakness in his left hand, Peterson’s celebrated style remains very much in evidence when he attacks a tune with his unparalleled verve, such as on “Dancetron” or “Cookin’ On The Trail.”

But Trail Of Dreams is a suite, after all, that musically depicts the various landscapes of a diverse country. And so, “Morning In Newfoundland” reveals an ease as the sun rises over North American continent in a time zone 1-1/2 hours ahead of Eastern Standard Time, as many Americans discovered on New Year’s Day 2000. “Banff The Beautiful” consists of a unhurried rolling rhythm supporting a melody of dotted half notes consuming entire measures. “Lonesome Prairie” proves that the plains can be bass-driven places as Pedersen takes the lead in introducing the tune, while “Ballad To P.E.I.” finds graceful description in Wakenius’ crystalline and bluesy exposition. “Dancetron” starts and ends as a reel before Peterson heightens the complexity and intensity of the tune with his unmistakable improvisational style.
-AllAboutJazz.com