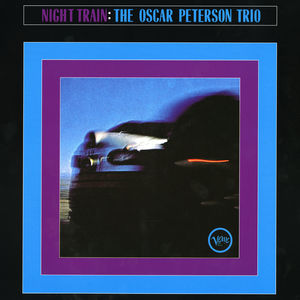 Oscar Peterson’s classic jazz recording Night Train has been named one of the 2019 winners of the Slaight Family Polaris Heritage Prize.

Like the Polaris Music Prize — whose winners include Arcade Fire, Feist, Tanya Tagaq, Kaytranada and, this year, Haviah Mighty — the Polaris Heritage Prize is awarded to albums based solely on artistic merit, disregarding sales or affiliations.

Released in 1963, Night Train captured the Oscar Peterson Trio during its prime, with Peterson on the piano flanked by bassist Ray Brown and drummer Ed Thigpen.

“How deeply honoured I am on Oscar’s behalf, knowing how humbled he would be to realize this recording remains significant more than 65 years after its release,” said Kelly Peterson, wife of the late Oscar. “It’s especially gratifying because this record contains the absolute original version of what is perhaps his most significant composition. During the recording session, Norman Granz challenged Oscar to compose a piece on the spot. The result was Hymn to Freedom. My gratitude for this honour knows no bounds. Thank you to all involved.”

Among what is likely a long list of people to have been influenced by Night Train is Diana Krall, who has said that listening to the album made her want to become a jazz pianist.

This year’s other winner of the Polaris Heritage Prize was Vancouver band D.O.A.’s album Hardcore ’81, a trailblazer in the genre of hardcore punk.

“Congratulations to these two winning artists. You’ve created important memorable recordings that have had a lasting impact on the musical landscape,” said Gary Slaight, president and CEO of Slaight Communications. “I have tremendous appreciation for the work that has gone into creating these timeless albums.”

During a career lasting more than 60 years, Oscar Peterson released more than 200 recordings, won eight Grammy Awards and is known to this day as one of the greatest jazz pianists of all time. He died in 2007.
Adam Feibel, jazz.fm

Although the repertoire on this CD reissue by the Oscar Peterson Trio (with bassist Ray Brown and drummer Ed Thigpen) is fairly typical (with such veteran standards as "C Jam Blues," "Bags' Groove," "Easy Does It" and "I Got It Bad"), Peterson and his sidemen sound fairly inspired. Actually the highpoints are the final two selections: Duke Ellington's "Band Call" and the original version of O.P.'s "Hymn to Freedom." This CD gives one a definitive look at the 1960s Oscar Peterson Trio.
-Scott Yanow, AllMusic