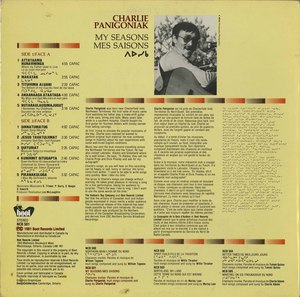 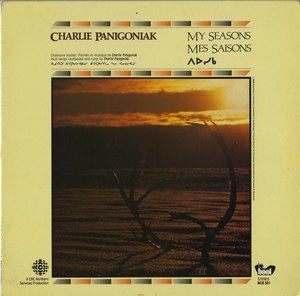 My favourite song from Charlie Panigoniak's My Season album is "Anaanaga Ataataga". On one of Charlie's radio sessions he spoke recently about the decay sound he use to be able to produce when singing, but is now unable to do. He was happy he did some recordings and enjoyed making people laugh during his performances.
Sincerely
-William Angalik

Charlie Panigoniak. Singer, songwriter, guitarist, b Chesterfield Inlet, on Hudson Bay, District of Keewatin, NWT, 7 Mar 1946. By vocation he has been a carver and hunter, based first at Eskimo Point, NWT, and, after 1985, at nearby Rankin Inlet. As a boy he played a guitar made by his father. In 1967, while receiving treatment for tuberculosis at a Brandon, Man, sanatarium, Panigoniak purchased his first real guitar and began to write songs. His first effort, about the sanatorium, was in English. His many songs since, composed in a country-folk style, have been written in the Inuktitut language and concern family, friends and everyday events in his life.

Panigoniak was heard in 1973 at Rankin Inlet by a CBC producer, Doug Ward, who arranged a recording session in Toronto that summer. Panigoniak's albums for the CBC's Northern Service, made at intervals into the 1980s, have included two EPs (11 songs) and the LPs Inuktitut Christmas & Gospel Songs, My Seasons (issued commercially by Boot, NCB-501) and Just for Kids. The last was recorded with Lorna Panigoniak (b Tasseor), his frequent partner after 1977, and reflects Panigoniak's preference latterly for singing to audiences of children. He has also made two CBC broadcast EPs, LM-291 and LM-292.

A popular figure in the North, Panigoniak has been heard on radio and TV and at festivals in the Northwest Territories (eg, Festival on the Rock, Yellowknife), the Yukon, and Labrador. He has also travelled to Alaska, Ireland and Greenland. In 1990 he appeared at WOMAD (Harbourfront) in Toronto.
-Canadian Encyclopedia