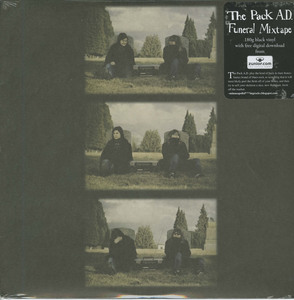 On August 12, 2008 Funeral Mixtape arrives hot on the heels of The Pack A.D.'s Mint Records debut Tintype. Recorded live off the floor to analog tape at The Hive Studios, Funeral Mixtape perfectly encapsulates the intensity and warmth of The Pack A.D.'s music. This studio production captures the power of Becky Black's vocals at their best (heard on on tracks such as the New Orleans death march "Oh Be Joyful").

How can a duo generate such a massive sound? Becky Black's vocals have been compared to Janis Joplin, and the combined duo's live show to long established acts like The Black Keys. All comparison aside The Pack A.D. exhibits an ability to present the sound and vision of the blues in their own way: brooding, explosive, and unrestrained.

Vancouver-based The Pack A.D. is one of the latest additions to the impressive roster of Mint Records. A two-piece blues-rock band consisting of just guitar and drums, the all-girl White Stripes comparisons are inevitable, and in truth, apt. Becky Black and Maya Miller share the playful intensity of Jack and Meg White, as well as their anything-goes attitude. Individually, Miller’s drumming is simplistic but totally appropriate, while Black can alternate between sweet sing-songs and blistering howls in the blink of an eye.

Funeral Mixtape, their second album this year, is stocked with the kind of blues created just meticulously enough to sound completely off the cuff. The album begins with flourishes of unbridled energy, like on tracks “Don’t Have to Like You” and “Making Gestures,” the latter featuring the album’s best guitar work. The ending is equally strong, with Mixtape’s best song “Wolves and Werewolves,” an insistent 12-bar blues song featuring haunting tempo changes, emerging 10 tracks in.

The middle portion of the album suffers when the band eases off the gas a bit too much. Good tunes are still in there — “Oh Be Joyful” and “Underground” — but others (“June”) are too far off track. Funeral Mixtape is a worthy successor to the band’s impressive debut, Tintype, and the speed of its release is astonishing. In two fell swoops, The Pack A.D. has effectively squashed any of the preconceptions that come with being a two-piece, all girl blues-rock group.