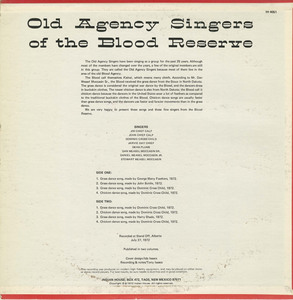 Old Agency Singers of the Blood Reserve - Volume One BACK 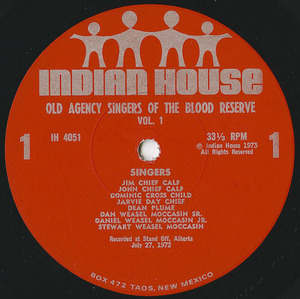 Old Agency Singers of the Blood Reserve - Volume One LABEL 01 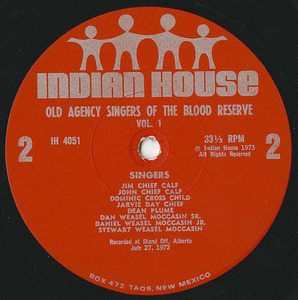 Old Agency Singers of the Blood Reserve - Volume One LABEL 02 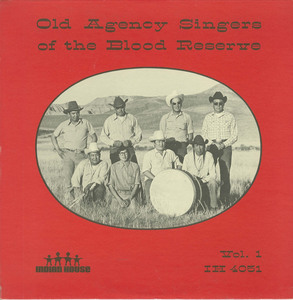 We are very happy to present these songs and these fine singers from the Blood Reserve." end liner notes.

The album was recorded at Stand Off, Alberta on July 27, 1972. It was published in Two Volumes. Featured here is the First Volume. The cover design was by Ida Isaacs. The recording & notes were by Tony Isaacs. The album was produced by Indian House IH 4051, Box 472, Taos, New Mexico 87571, USA.

"The town of Stand Off, Alberta was named after an historical event. "Liver-Eating" Johnson in the company of two other men was heading north with a pack train of supplies including whiskey to trade with the Canadian Indians. Whiskey was illegal to trade with the Indians and when a U.S. Marshal got wind of the endeavor he set out in pursuit with a troop of cavalry to stop the "Liver-Eater." Johnson and his party held them off and when the Marshal demanded his arrest they refused. They stood-off the soldiers and proceeded on over the Belly River, and named their fort "Stand-Off". "Avenging Fury of the Plains" Dennis John McLelland Ed.D"

The Kainai Tribe were called Blood Tribe by the early White Man traders. They noticed that the Kainai used red ocre on their faces and on their ceremonial objects. The Kainaiwa reserve is the largest reserve in Canada and is located approximately 200km south of Calgary, Alberta.

GEORGE MANY FEATHERS "Aakaikkimaan", beloved husband of Emma, died peacefully on September 4 at Standoff, Alberta, at the age of 81.

George (Tsa Tsi) was born in 1922 on the Blood Reserve and attended St.Mary's Residential school as a youth. He worked as a farm & ranch laborer throughout southern Alberta.

George met and married Emma Fox in 1969. George and Emma flew to England and Scotland and were part Ward Air's delegation to promote the Calgary Exhibition and Stampede. They were given the honor to perform for Prince Phillip.

George was noted to be one of the last survivors to practice the traditional way of chicken dancing, and won many international competitions. A special honor dance was held at Crow Agency, Montana in the 1980's, sending the dancer home with not only great honor but also the nickname of "Chicken George." He attended bundle openings and Sun Dance celebrations. Some years he took his family on the pow wow trail and George became skilled at feather games. He enjoyed watching football, hockey and a good W.W.F. wrestling match. On quieter days, one could find him on the prairie, seeking strands of sweet grass and mint, or packing a sketch pad for his drawings....