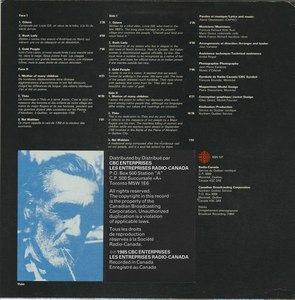 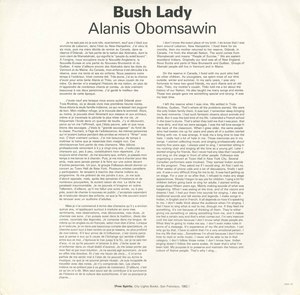 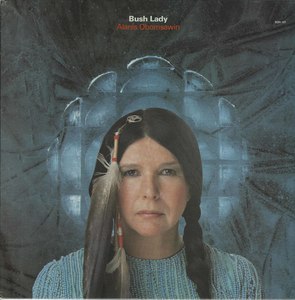 Bush Lady is the only LP ever made by Alanis Obomsawin, a member of the Abenaki First Nations and best known as one of Canada’s most accomplished and decorated documentary filmmakers. Less well known is that Obomsawin began her artistic career as a singer-songwriter in the 1960s, part of a broad movement of Indigenous artists from across North America rallying in new assertions of cultural consciousness, political rights, and reckonings with oppressive colonial history. She was invited by Folkways to perform at Town Hall in New York City in the early 1960s and spent that decade primarily identifying as a singer, channeling traditional songs hand-in-hand with modern composition. Twenty years later, amidst her burgeoning film career, Bush Lady was born of sessions sponsored by CBC Radio in 1984. Unsatisfied with these recordings, Obomsawin reclaimed the master tapes, remade the album, and issued it on her own private press in 1988. This unique, profound, magical record has been out of print and gaining cult status ever since.

Alanis Obomsawin, a member of the Abenaki Nation, is one of Canada’s most distinguished documentary filmmakers. Her latest film is the 2007 National Film Board of Canada documentary Gene Boy Came Home, in which Ms Obomsawin turns her camera on the ugliness of war through the eyes of one survivor, Vietnam War veteran Eugene "Gene Boy" Benedict, from her home community of Odanak.

Her films
The people of Odanak and their stories are also the subject of her award-winning 2006 feature documentary Waban-Aki: People from Where the Sun Rises. Obomsawin’s 2005 drama Sigwan focuses on a young girl who is aided by the animals of the forest. Her 2003 NFB documentary Our Nationhood chronicles the determination and tenacity of the Listuguj Mi'gmaq people to use and manage the natural resources of their traditional lands. The Mi’gmaq of Esgenoopetitj (Burnt Church), New Brunswick were the subject of her 2002 documentary, Is the Crown at war with us?, a powerful and painstakingly researched look at the conflict over fishing rights.

Obomsawin began her career as a singer, writer and storyteller, but dove into filmmaking in 1967 with Christmas at Moose Factory, which she wrote and directed. Since then, Obomsawin has made over 30 uncompromising documentaries on issues affecting Aboriginal people in Canada. Her other films include: Incident at Restigouche (1984), a powerful depiction of the Quebec police raid of a Micmac reserve; Richard Cardinal: Cry from a Diary of a Métis Child (1986), the disturbing examination of an adolescent suicide, and No Address (1988), a look at Montreal’s homeless.

Joining the NFB
In 1960, Obomsawin made her professional debut as a singer in New York City. In 1967, NFB producers Joe Koenig and Bob Verrall saw Obomsawin on TV. They invited the singer/storyteller to the Film Board to work as an advisor on a film about Aboriginal people.

Obomsawin went on to direct films of her own, while continuing to perform and fight for justice for her people. For almost 40 years, Obomsawin has directed documentaries at the NFB with strong social content, inspired by the desire to let the voices of her people be heard. In 1983, she was made a member of the Order of Canada, in recognition of her dedication to the well-being of her people and the preservation of the First Nations’ heritage through her filmmaking and activism.

Music and art
As a singer/songwriter, Obomsawin has toured Canada, the United States and Europe performing for humanitarian causes in niversities, museums, prisons and art centres, as well as at folk art festivals. Her 1988 album Bush Lady features traditional songs of the Abenaki
people, as well as original compositions.

For over 25 years, Obomsawin has worked as an engraver and print-maker, with exhibitions in Canada and Europe. Mother and child imagery is prominent in her work, which also combines material from her own dreams with animal spirits and historical events. Her work was exhibited at the Maison Lacombe in Quebec in 2007.

Early years
Alanis Obomsawin was born in New Hampshire on Abenaki Territory. When she was 6 months old, her mother returned to the Odanak reserve north east of Montreal where Alanis lived until she was 9. Théophile Panadis, her mother’s cousin, initiated Alanis into the history of the Abenaki Nation and taught her many songs and legends. Obomsawin and her parents then left Odanak for Trois Rivières, where they were the only Native family. Cut off, speaking little French and no English, Obomsawin held fast to the songs and stories she had learned on the reserve.

Awards and honours
Obomsawin is the subject of the first-ever book on Native filmmakers, Alanis Obomsawin: The Vision of a Native Filmmaker, by Randolph Lewis, published in 2006 by the University of Nebraska Press.

In March 2001, Obomsawin received the Governor General’s Award in Visual and Media Arts. An Officer of the Order of Canada, Obomsawin’s many honours also include the Luminaria Tribute for Lifetime Achievement from the Santa Fe Film Festival, the International Documentary Association’s Pioneer Award, the Toronto Women in Film and Television’s (TWIFT) Outstanding Achievement Award in Direction, the Canadian Native Arts Foundation National Aboriginal Achievement Award, and the Outstanding Contributions Award from the Canadian Sociology and Anthropology Association (CSAA). The latter marks the first time that the CSAA has honoured someone who is not an academic in the field of sociology and anthropology.