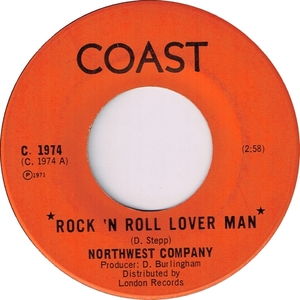 Canadian garage rock band the Northwest Company formed in Haney B.C. in 1966. They played in the Vancouver area during the late 1960's and had a strong local following. They recorded their first 45 in 1967 which was released on the tiny Grenier Record label titled Hard To Cry / Get Away From It All which today trades for more than $1000; followed in 1967 with The End Is Autumn / Eight Hour Day on Canadian London. Northwest Company also recorded for the Canadian Apex label releasing Time For Everyone in 1968 (Reached CKLG #20) and Can You Remember in 1969. The group moved over to Coast Records in 1970 where they released Everybody's Got To Care in 1970 and the Rockin' Rock 'N Roll Lover Man in 1971. Their final release was in 1971 on Stamp Records where they released Ain't Nothing Wrong With Rock And Roll. The group disbanded in 1974.

Let It All written by bass player Gowan Jorgenson and guitarist Ray O'Toole is a multi-tempo rocker with good musicianship throughout and the band really lets loose towards the end of the song with a blistering guitar solo, driving bass and drums!