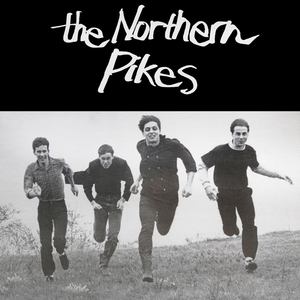 Original 6 Song EP. Likely the best record you've never heard, at least from the 80's, if you like catchy indie/alternative power pop. Only 6 tracks on this debut, but not a dud in the bunch.

The Northern Pikes emerged as one of Canada's hottest bands of the 1980s, touring North America along with such names as Duran Duran, David Bowie, and The Fixx. Before vaulting onto the big stage, they established themselves as an exciting live act through their relentless touring of the bar circuit across Canada's prairie lands in the mid-1980s, and with two indie releases, before attracting the attention of executives at Virgin Records Canada in 1985. After completing a multi-album contract with Virgin, the group disbanded in 1993. Individual band members pursued solo projects for several years, but reunited again in late 1999 to release a collection of old songs as well as embark into new territory in the 2000s.

The band formed smack dab in the middle of North America in Saskatoon, Saskatchewan, Canada, in 1983. Prior to the band's final quartet incarnation in 1986 that included Bryon Potvin on lead guitar, Jay Semko on bass, Merl Bryck on guitar, and Don Schmid on drums, the group had included drummers Rob Esch (1983–84) and Glenn Hollingshead (1984–85). The band's genesis traced its roots to the prairies of central Canada, where the group evolved out of a changing roster of players from Saskatoon bands Doris Daye, The Idols, and Envelope 17. Despite hailing from the windswept flatlands of Canada's interior, the band's sound, as it ultimately morphed into The Northern Pikes, was a bit more new wave than the country or pop their audience demanded. Potvin joked in a 1987 interview for the Ottawa Citizen, "We didn't get a lot of work. The music was pretty off the wall. We thought if we had been in a bigger centre that these groups might have turned out differently. But in the end it worked to our advantage. In the big city, you can get swept up by what's happening and lose yourself."

The band's relentless touring schedule bolstered their recognition, and they were able to produce two self-funded independent albums, The Northern Pikes in 1984 and Scene in North America the following year. The band's indie releases caught the attention of Doug Chappell, who was president of Virgin Records, Canada. In late 1986 The Pikes signed a deal with Virgin, and by January of 1987 the band had assembled with producers Fraser Hill and Rick Hutt to record their major label debut, Big Blue Sky, which was released in June of 1987 and included the hit singles "Teenland" and "Things I Do for Money." The band hitched a ride on the star wagon, opening for David Bowie, Duran Duran, and The Fixx. The band's sophomore release, Secrets of the Alibi, came out in 1988, but did not have widespread appeal with critics, who seemed unwilling to accept the band's shift from a "buoyant pop" sound to what Montreal Gazette critic Mark Lepage called "the great Canadian angst band." Although Lepage applauded the album, noting that "Every song here is steeped in coming-of-age feelings of loneliness, post-adolescent introspection and questioning," he concluded, "The Northern Pikes may be too introspective for some. There's no levity whatsoever on this record," and suggested that the band members might be taking themselves too seriously. One artist who did take the band seriously was Robert Palmer, who asked The Pikes to open for him on his North American tour in 1989.

Riding the Crest and Sinking to the Trough
Snow in June, The Pikes' third major label release, was passed over for distribution by Virgin in the United States, but was put out by Scotti Brothers Records in 1991 after its 1990 Canadian release. Virgin passed on what proved to be The Pikes' most successful commercial album, as it ultimately went double platinum and garnered a Juno nomination for The Northern Pikes as Best Group in 1991. Hit singles "She Ain't Pretty," "Girl with a Problem," and "Kiss Me You Fool" gave the Canadian quartet a following outside its home territory with heavy airplay.

The band could not sustain the popularity they had reached with Snow in June on their next release, Neptune, in 1992, nor with their fifth release, Gig, a live album of their final tour, released in 1993. By the time Gig was released, the band had already anticipated this album to be their swan song, as the members had grown frustrated with the lack of marketing put into their work outside of Canada. Potvin recalled in Toronto's National Post, "We were banging our heads against the wall in the States a little bit…. There was sort of this adrift-at-sea kind of feeling." The band officially broke up in 1993 when Semko quit to produce the solo album Mouse and write the music for the television show Due South. Potvin released a solo album of his own called Heartbreakthrough in 2000, and Schmid formed the indie band The NoN Happner's.