Nomeansno - The Worldhood of the World (as such) 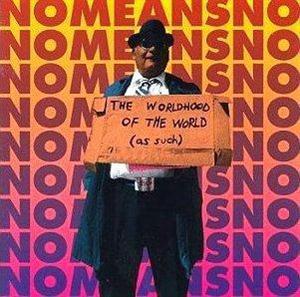 This is a fantastic album You must all go out and buy it, right now. There. That's the review. Oh -- you want a little more? Ok...

I've been following Victoria's NoMeansNo since the late 80's. The Day Everything Became Isolated and Destroyed was one of the first CDs I ever bought, and it's still one of my favourite albums ever. The followup, Wrong, was punkier, and was cool, too, but then guitarist Andy Kerr left the band. Subsequent (Wright brothers only) discs, such as 0+2=1, well, sucked. 1993 brought Why Do They Call Me Mr. Happy?, which was ok, but nothing to get excited about. Finally, though, last fall The Worldhood of the World (as such) appeared, and it is something to get excited about!

What's changed? The band once again has a solid guitarist, namely Tom Holliston of the Show Business Giants, who joined up a couple years ago. I saw him and them live soon after he joined, and I didn't like him, as he didn't seem to be contributing anything. That seems to have changed. He is all over this CD. His playing is a lot punkier than Kerr's, but he can still be precise and melodic when he needs to be.

The biggest change, though, is that NoMeansNo seem to be having fun again. The word I keep thinking is "exuberance." There's probably more energy in this CD than in the band's last three or four combined. Bassist Rob Wright, the most prominent vocalist this time out, seems hardly able to contain himself, like the proverbial kid in a good used CD store. When he snarls, it's scary, and when he bellows in the way only he can, you can hear the massive grin that often contorts his face when he plays.

Not that this is a particularly happy disc, necessarily, taking on the usual NoMeansNo themes: personal pain ("State of Grace"), personal (ir)responsibility ("Tuck it Away," "My Politics"), socially-bred violence ("He Learned How to Bleed," "I've Got a Gun"), nice stuff like that. Almost every song is a standout.

So does it make more sense? Go buy it. Now.
-Rodney Gitzel

Engineered by Brian (Who) Else
Artwork by Bill Baker