Mythical Meadow - The Day Has Come b/w Follow Me 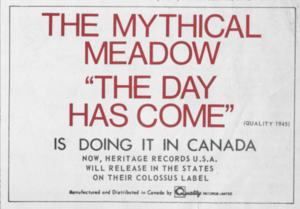 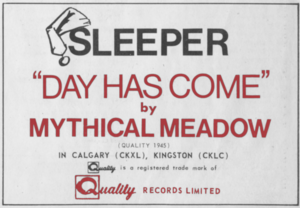 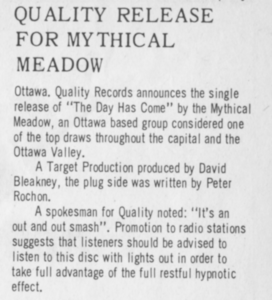 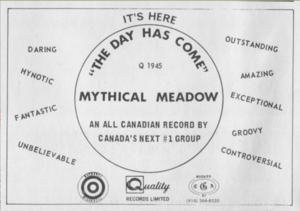 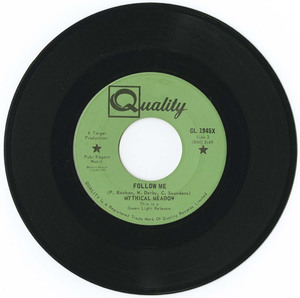 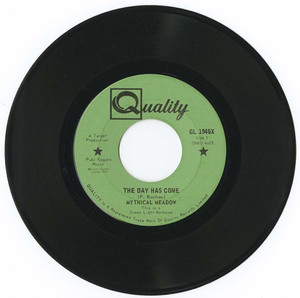 A haunting and doomy ballad, full of melodramatic keyboards, evocative vocals and some heat fx. Reminiscent of early Uriah Heep. An earlier effort, You've Got That Lovin' Look, had brought them a minor hit in February 1969.

When you combine a gallon of musical ability, add a dash of comedy and stir well, you end up with a rock group guaranteed to tickle the pallate of any musical gourmet.

Such a group may be found here in Ottawa and they go by the name of The Mythical Meadow. They are five boys who have combined the right ingredients to come up with a tight sound and claim to have one of the best shows to be found anywhere in Canada.

When they're on stage they give their all to put on an act intended to bring emotions from sadness to "one big happy".

Just looking at the concentration mirrored on the faces of each member of The Meadow is enough to tell you that they're doing their best for the audience.

As Wayne Derby, the group's lead singer put it "At the end of a night I go to the dressing room and shake for five minutes. The tension on stage by the end of our act is fantastic".

The group has already released a record and the "A" side is a tune written by Les Emmerson on the Staccatos, entitled "You've Got That Lovin' Look". It is likely to be a big success. The "B" side is called "I Am The Sun" and was written by two members of the group. If the title seems familiar, the same words appear on the group's van and is used as their watchword.

Another recording session is in the offing and should be completed soon with the record being released some time in the new year.

Playing three or four nights a week is a strain on the group but this is a part of the business which nearly all groups have to put up with.

As the group's organist, Peter Rochon put it "It's like a game of professional football because you use up as a football team uses in a game".

The Mythical Meadow has potential and hopes to use it for the American market - but it would be as Canadians. All five of the group were insistent on this fact and would have it no other way.

Their stage act blends lighting with smoke and fire to create atmosphere for particular songs.

Another unique part of their act occurs at the end of the night when during the last member, Wayne the lead singer, gets so carried away with his song that he has to be carried off the stage a la James Brown.

A quality which sets The Mythical Meadow apart from many other groups is their friendliness towards the audience. The boys are on stage to entertain and will go all out to do it.

This charm plus lots of talent will carry this group where others have not. They are called The Mythical Meadow and are worth keeping an eye on.
-Brian Ward, The Ottawa Journal, Nov 29, 1968