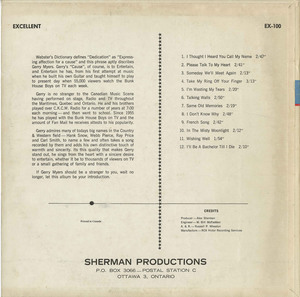 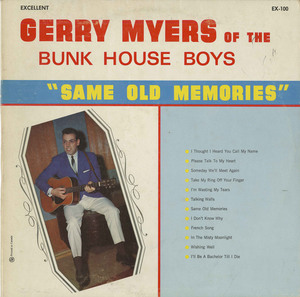 Gerry Myers got the urge to sing early in life but because he was one of 16 brothers and sisters, when the desire to sing met the need of a guitar there simply was not enough to go around. Since he had to have a guitar, but could not afford one, he made one!

That is the creative style of Gerry Myers, a Maritime legend, who for the past 40 years has been touching the hearts of its people through his songs. When a song such as “Ou est Mama,” the “French Song” or “Ta Decision” is performed in the Maritimes, everyone knows the words – his songs are part of the Maritime tradition.

In the early 1950’s Gerry and his brothers formed the group “Bunkhouse Boys”. After many years of weekly radio broadcasts at CKCW in Moncton, they hosted the first TV musical variety show in New Brunswick. The notoriety they received from continuous exposure through radio and television, always ensured a packed house whenever or wherever they performed.

Gerry was inducted into the New Brunswick Hall of Fame as part of the Bunkhouse Boys in 1984. When the group disbanded, he continued to write songs and record first as a solo act and then with his daughters, Debbie and Shirley. He has certainly paved the way for his daughters as they both have received international attention for their singing talents.

He continues today to perform and write music that reflects the feelings and experiences of his life and those around him.