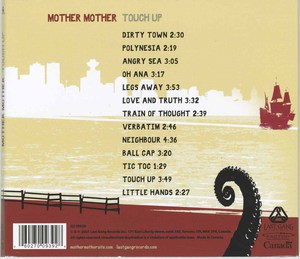 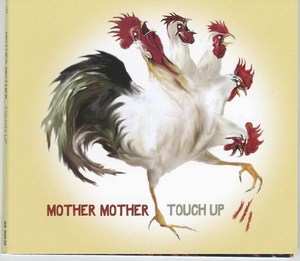 As you glance at the cover of Mother Mother’s debut disc – Touch Up – you are greeted with a five-headed rooster (or is it a fighting cock, I have no idea). Sure, it might be an action shot showing the rooster in motion, but I prefer to think of it as a five headed beast, that represents the band itself. The number of heads could also represent the number of different styles this band uses to create a truly unique sound.

Mixing elements of freak folk, indie rock, art school insanity, free jazz, and ridiculously tight three part harmonies and yelps, this Vancouver based quintet is fixing to make a big splash in 2007. Touch Up is actually just that, a remastered version of their self-released disc with the support of the Canadian indie stable Last Gang Records (Metric, MSTRKRFT, Emily Haines).

With so many Canadian bands coming on the scene, it’s hard to really create a sound that stands out. Mixing genres and styles usually results in an unfocused mess. Where Mother Mother is different from most indie acts is their music theory background, so despite all of their experimentation they know what sounds good together and the result is a tight collection of songs as diverse as a Benetton ad.

Touch up uses fierce foot stomping country riffs (Train), funk (Neighbour), pseudo hip hop (Verbatim), blue grass (Tick Talk), theatre musical (Love and Truth) and pretty well everything else you can imagine, but their lyrics and vocal delivery are strong enough to handle each style (usually in the same song).

As the album starts with some muted chords, a cowbell and a three part round you sense you are about to hear something different from the norm. Folky, bluegrass breakdowns and harmonies are paired with freak folk interludes, yelps and drums. I know this sounds like it would never work, but it really does.

Polynesia is a perfect example of what I’m talking about. A simple rock riff is the container for staccato lyrics that Ryan, Molly Debra-Jean yelp in perfect time. Instead of losing the listener with a frantic overpowering guitar playing in the background, the simplicity of a standard hook lets the vocalists explore the space so to speak.

When Ryan takes the lead, the band drifts into a more freak folk/Devendra based model, but instead of picking for 5 minutes (Angry Sea), Mother Mother uses some angry drums and harmonies to keep the song moving. I think the band is strongest when they are keeping the pace moving, like the high energy Oh Ana, because it really highlights how good they are at changing tempo and adding swirling breakdowns, before cranking you back up into a frenzy. Every song intricate transitions, but they never seem awkward because they are coated with syrupy harmonies.

This record will be embraced by anyone who likes that quirky pop Canadian acts are becoming world renowned for, so look for them to explode after SXSW. They have their CD release party Feb 22nd @ the Plaza.

* Note – although it is not a good indicator of the whole record, Neighbour is one of the most addictive songs I’ve heard in a while. The funky riff slowly morphs into a metal tinged breakdown, full of static and feedback, before flipping the switch and adding stabbing strings to cement the groove.
-herohill