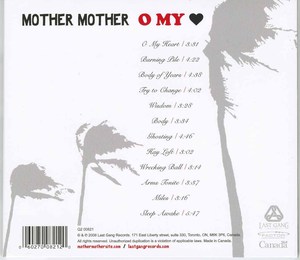 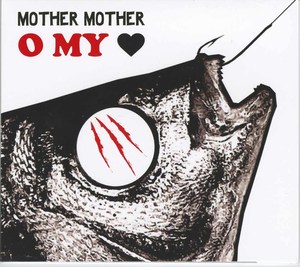 Manic, moving, and, above all, mellifluous, Mother Mother’s O My Heart is a unique specimen in the genus of indie rock: it deals with big issues like existential dread, death, and love without resorting to maudlin clichés, and it gives the listener loads of pleasure in the meantime.

A five-piece from Vancouver, Mother Mother, helmed by guitarist/vocalist Ryan Guldemond, sound like they came of age on a steady diet of the Pixies, Mozart, and William Burroughs. The influence of the Pixies is especially strong on the opener, “O My Heart”, which finds bassist Jeremy Page kicking things off with a line stolen straight from Kim Deal’s playbook. The deeply enjoyable “Body of Years” can also credit a good deal of its appeal to the Pixies, as nearly the whole band gets in on the act. Guldemond himself does it best, channeling a slightly more sane version of Black Francis as he sings, “All the remains of a cadaver of days / I keep hidden away / Keep them there just in case.”

The dark subject matter stands in contrast to the sonic tone of O My Heart, which is kaleidoscopically melodic and buoyed by the honey sweet accompanying vocals of Molly Guldemond (Ryan’s sister) and Debra-Jean Creelman. Thematically, O My Heart is all perverse glee, punctuated by descents into sea-deep sadness. It spends much of its time lamenting the shortcomings of both life and those of us stuck living it. Take these opening lines from “Try to Change”:

The repetitiveness of the lyrics illustrate the futility of the narrator’s efforts while building to a payoff that, of course, ends up just being more of the same. These kind of clever writing tricks would probably be a little irritating were it not for the angelic presence of Molly Guldemond and Jean-Creelman. The appeal of their soft, cooing vocals can’t be overstated, and without them, most of these songs would collapse under their own heavy, compositionally complex weight. The duo holds these songs aloft, though, especially darker ones like “Arms Tonight”, a message from a dead woman to her still-living lover—the sunniest sounding song on the album.

It’s that kind of witty juxtaposition, along with Mother Mother’s uncommonly keen sense of melody, which sets the band apart from the dozens and dozens of other Canadian indie rock bands that have emerged over the past decade. Mother Mother have an appreciation for irony that goes well beyond words. It’s similar to the kind of thing They Might Be Giants did during their best years, circa Lincoln and Flood, addressing bleak themes in a cheery way that belies the inherent despair. Mother Mother aren’t quite as lyrically smart as They Might Be Giants, but as composers, they boast as much ingenuity as the Giants or any other band cut from the same cloth. Sure, certain moments sound lifted straight from Doolittle. But as T.S. Eliot said, “Immature poets imitate; mature poets steal.”
-Matt Gonzales, popmatters