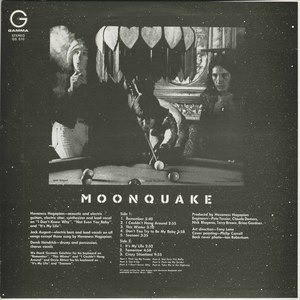 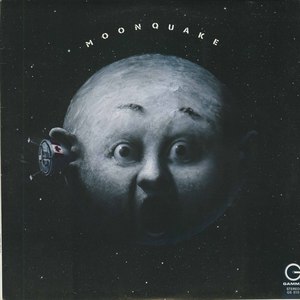 I recently watched a new rock trio perform, on television, a song called "Remember". I barely caught their name - Moonquake - and though struck by a haunting familiarity in their music, half-missed their song and style. Fortunately, I later received a copy of their debut album - Moonquake - and listened more closely to this tune, which opens side one. I also did as they suggested - I remembered. The sound and feeling it produced in me was much akin to the sound I used to feel from a favourite group of my younger days - The Yardbirds, who boasted such young geniuses as Eric Clapton, Jeff Beck and Jim Page. The sound wasn't really the same, not being accurate enough to suggest intentional mimicry, but the chords it struck within the listener were pleasantly familiar.

No name sprung to mind during the second cut, "I Couldn't Hang Around", but a fine area of country rock was delightfully defined.

"Winter" was next and opened with a non-evil Alice Cooper type intrumental approach, folloewd by a Five Man Elecrtical Band-like chorus - both of which evolved into a somehow unmistakable Moonquake sound.

Names from the past temporarily escaped me during "Don't You Try to Be My Baby", but only because they were so prominent and so gently revealed in influences that appeared so subtle and so obvious, all at the same time. It finally hit me that this excellent cut actually alternates between a John Lennon lament and a Paul McCartney chorus before blending the two into a sound that brings forth fond memories of the Lennon-McCartney partnership and even fonder feelings about Moonquake.

That made four songs in a row firmly stamped with the Moonquake identity yet each refreshingly different. All the while, this skilled, diverse program of solid rock came across as an entirely natural, contemporary end product of the '60s. And that's the key to Moonquake's undeniable success - though marvelously reflective, their music lives in it's own right and in it;s own time. Side One closes with some tasty, raunchy rock and roll in a tune called "Seasons".

Side two contains more Moonquake marvels and is as good as side one. Everything is conceived, executed and projected extremely well, making this the finest debut album I've heard in some time. Hovaness Hagopian on acoustic and electric guitarm electric sitar, synthesizer and some lead vocals; Derek Hendrick on drums and percussion and Jack August on bass and most lead vocals are Moonquake. Moonquake is the group and Moonquake is the album. Should you forget the name, just check the American charts in the near future.
-Bill Provick, Ottawa Citizen, June 6, 1974