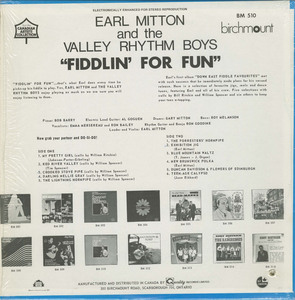 Earl Mitton-Fiddlin For Fun BACK 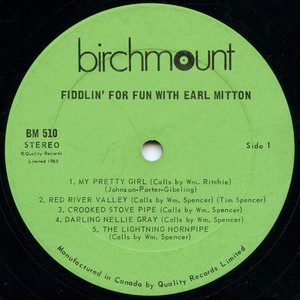 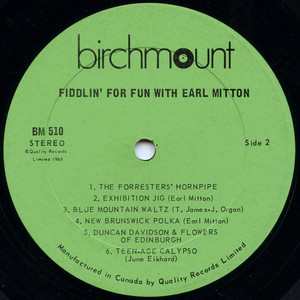 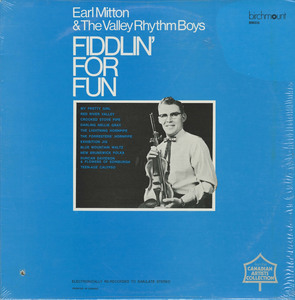 Earl Mitton was born in Moncton , New Brunswick in 1926 and at the age of 6 months moved to Stewiake , Nova Scotia and later lived in Amherst , Nova Scotia . He enlisted in the Canadian Army at Fredericton , NB in 1944 and served until 1946. His first fiddle was a gift from his father.

He moved to Fredericton in 1947 and there formed the band called the Valley Rhythm Boys in 1950. Jack Fenety of CFNB gave the group its name when he was doing the announcing chores on the broadcast. Earl along with the Valley Rhythm Boys did a live radio show from Radio Station CFNB for 10 years. He recorded three albums for Quality Records, on of which is entitled “Down East Fiddling”.

Earl competed in the North American Fiddling Contest at Shelburne , Ontario and finished in the top three in 1957-1958. Earl and his group had a weekly TV series on CHSJ-TV in Saint John for a period of three years.

Earl was a close personal friend of the late Don Messer and appeared many times on his coast-to-coast television show. One of his biggest thrills was his first meeting with Don Messer in 1943. “Earl Mitton's Breakdown” was featured on one of Don Messer's recordings.

As well as being an accomplished musician, Earl is a composer. Among his compositions are the “New Brunswick Hornpipe”, “Blue Violet Breakdown”, “The Carleton County Hornpipe” and “Earl Mitton's Breakdown”.

Along with the fiddle, Earl also plays drums and guitar. He played clarinet and saxophone in the Fredericton City Concert & Marching Band. He made several appearances with the RCR Band as guest violinist – one of which at The Silver Broom in 1980. He received a letter of appreciation from Lieutenant Governor Stanley for his appearance with this band at the Fredericton Playhouse.
Earl and his wife Phyllis still make their home in Fredericton . They have two sons, Richard and Brian and a grandson Andrew.