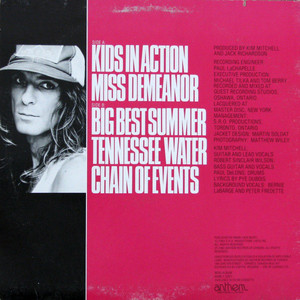 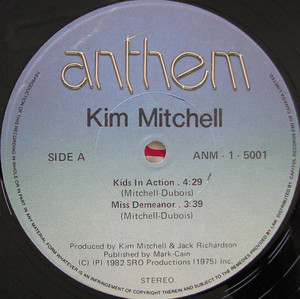 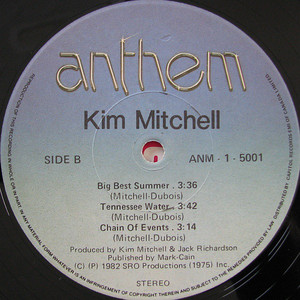 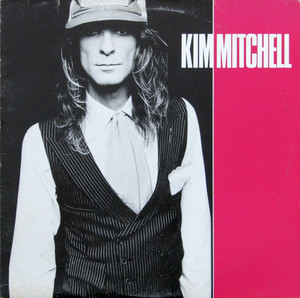 This is an incredibly difficult review to write. How? How can words do justice to this magnificent 5-song EP of rock perfection? Am I supposed to somehow relay in English how this album makes me, and many other Max Webster fans feel? I don’t think it too crazy to suggest that the self-titled Kim Mitchell EP is the greatest EP our country has produced. As far as rock music goes in general, you will find very few Canadian releases as solidly untouchable as Kim Mitchell. To say this is an intimidating review to attempt is an understatement. There will be some reading this whose knowledge of Kim and Max vastly exceeds mine, and even though I have played this EP hundreds upon hundreds of times, I still need to actually play it again in order to convey to you how excellent it truly is.

Mitchell burned out on Max Webster. There were numerous lineup changes towards the end, and Kim walked out. He was quick to bounce back with some new band members (Peter Fredette, Robert Sinclair Wilson, Paul DeLong) and some new songs. Still with Kim through the breakup was Max Webster lyricist Pye Dubois, the only holdover from that band. (Ex-Max bassist Mike Tilka was also an executive producer, as he was on the Max albums after he left.) Kim settled into a recording studio in Oshawa Ontario (!) with the legendary Jack Richardson.

The guitar blasts of “Kids In Action” are sometimes included on Max Webster hits albums, but it was originally released as the opening track on Kim Mitchell. “I guess we’re just gonna have to be the best bonfire in town,” sings Kim, and I think he succeeded. “We want modern thrills, we want rock n’ roll that kills,” sing the backing band. I think we got it.

“Kids In Action” is the perfect storm of Max’s harder side, with Kim’s newly found-melodic sensibilities. That guitar is hard (though just as finger-lickin’-good) but the choruses have a new harmonic sheen. Peter Fredette provided backing vocals to the record, and Kim fans know how awesome and integral he is to Kim’s solo sound. Meanwhile DeLong can’t resist throwing in some Max-worthy drum fills that shake the cranium. (I read somewhere that David Lee Roth’s band had worked on a cover of “Kids In Action” for Diamond Dave’s first solo album.)

What a killer opener. Yet “Miss Demeanor” may be the best tune on the record. This one has always sort of reminded me of “Beast of Burden” by the Stones, and I often sequenced them together on mix CDs. It’s harder than “Beast of Burden”, but has irresistible “ooh ooh” backing vocals. Everything about this song is perfect from the simple riff to the amazing rhythm section. Kim unexpectedly throws on an acoustic solo, just as terrific as any electric solo would be. The song is also supersaturated with nice little electric guitar licks.

If you title a song “Big Best Summer” then it had better sound like it. Kim’s “Big Best Summer” is as gleeful as you want it to be, with most of the joy coming across in the guitar licks. Once again the rhythm section has it laid down perfect, leaving Kim plenty of space to splash down tons of little guitar bits and pieces. “Sometimes we thought we were the only ones under the sun.” Yeah, I think I’ve had those summers too.

If “Miss Demeanor” wasn’t the best tune on the album, then “Tennessee Water” has to be. This one blows the doors off, with a slippery southern guitar lick and relentless groove that keeps cooking and won’t stop. This is also Pye’s first lyrical mention of the Bojar Grill, that I am aware of. It’s good time rock n’ roll, performed by guys who really know they’re doing. Incredible stuff. I definitely gotta hit up this Bojar Grill.

The slow rock of “Chain of Events” was chosen to close the record. There are a couple slight dissonant chords that keep the song on the experimental side. It also has a strange rhythmic quality, and quirky Pye lyrics. Kim’s guitar solo is bizarre and Zappa-esque. This song would have satisfied any Max fans who worried that some of the other tunes were too straightforward. And that’s the EP.

It’s worth noting that unlike Kim’s later albums, and also unlike Max Webster, this EP has no keyboards. This allows the bass guitar to breath, and leaves Kim plenty of space for guitar fun. As such, this is the toughest Kim solo release by far. As good as Akimbo Alogo was, this is undeniably even better.