Merritt, Diane - Angel of My Dreams 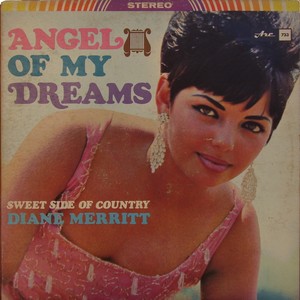 Angel of My Dreams

"ANGEL OF MY DREAMS is Diane Merrit's first recording...This being so, you should know that Ben Weatherby, who produced the album, THE MUSTANGS, who masterfully back her on it, the entire Arc Records staff from sound studio to pressing plant - all are betting on Diane Merritt to win...Diane Merritt, who inspires such confidence, is twenty-one years old. She was born in Russell, Manitoba, but reared in east in industrial Hamilton. Diane has been singing professionally for only two years.

In that time she has appeared frequently on CHCH-TV's very popular "Music Go Round," guested on many radio shows (most notably with Moose Letrek over CFGM, Ontario's Country Powerhouse) and performed extensively at clubs and in concert.

Now touring with the Varga Brothers (it was Ernie Varga who introduced her to country music), Diane is slated to appear on The Carl Smith Show - CFTO-TV; What's Happening, also on CFTO-TV; Hayride - WWVA, originating in Wheeling, West Virginia, and the highly-rated Gary Buck TV show emanating from Kitchener, Ontario.