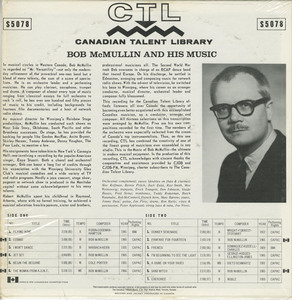 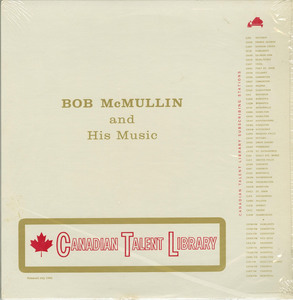 The late Bob McMullin casts a long shadow across the musical history of the CBC. He played clarinet and trumpet in the CBC Edmonton Radio Orchestra, and served as composer or music director for the programs Linger Awhile, The Bob McMullin Show, Music Hop, House Of Pride, Side Street, The Collaborators, The King of Kensington and The DuMaurier Search For Stars. In addition to all this, he had material performed by the Toronto, Montréal, Winnipeg and CBC Symphony Orchestras, produced and/or arranged albums by pop, jazz and country artists, scored a few feature-length films, led his own jazz quartet (which sometimes played with Lenny Breau) and hosted a nightly classical music radio program.

Born in Lewiston, Utah, in 1921, McMullin moved to Alberta at the age of four and became a Canadian citizen in 1946. His musical career was built on the foundation of only one year of formal piano lessons, and he was active as a musician until shortly before his death in 1995, acting as musical director of Winnipeg's Rainbow Stage throughout the 1990's.

All three of the songs I've posted here are jazzy instrumental themes for CBC programs of the same name, the best-known of which is, of course, The King Of Kensington.

Robert or Bob (Wesley) McMullin. Composer, arranger, conductor, brass and winds player, b Lewiston, Utah, 29 Apr 1921, naturalized Canadian 1946, d Regina 3 Jan 1995. Robert McMullin was taken at age four to Raymond, near Lethbridge, Alta, where he had a year of piano lessons in 1935. He had no other formal music education. He played drums in local dance bands, and after leading an RCAF dance band in Europe during World War II as a saxophonist, he settled in Edmonton. His first major work, Sketches from the Rocky Mountains, was completed in 1948 and premiered that year by the Toronto Symphony Orchestra under Sir Ernest MacMillan. It was performed later by the Montréal Symphony Orchestra and, with the composer conducting, by the Edmonton Symphony Orchestra. The Toronto Symphony Orchestra recorded McMullin's second 'sketch', 'Pass River,' in 1950 (RCI 19). In 1952 McMullin wrote Essay for Orchestra on commission for the Edmonton Symphony Orchestra.