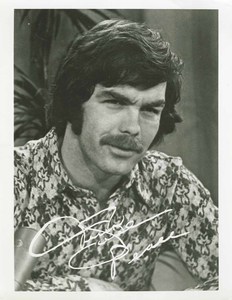 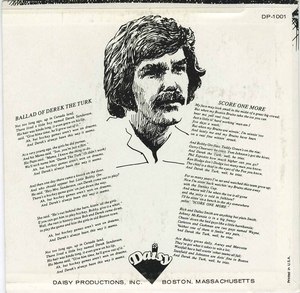 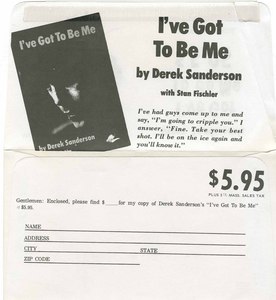 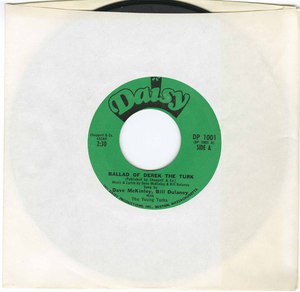 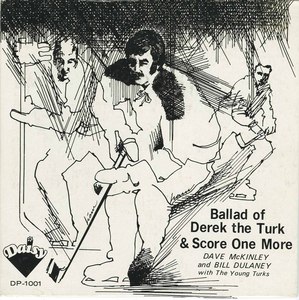 Ballad of the (Derek Sanderson) Turk b/w Score One More

"Combine a gritty style of play with quick hands and fast feet, throw in a swagger that sat well with his movie-star good looks, mix well with his fair share of nastiness and you have the young Derek Sanderson, better known by his friends and teammates as “Turk”.

Born and raised in Niagara Falls, Ontario, he played his junior hockey for the N.F. Flyers. In 1965 Turk led his team to the Memorial Cup, symbol of junior hockey supremacy in Canada and in 1967 he was the recipient of the Eddie Powers Memorial Trophy as the OHL’s leading scorer.

Instinctively, Derek always understood the value of “the big stage.” In 1966, the Boston Bruins management, in the middle of a cellar-dwelling season, decided to arrange a game in the Boston Gardens between the Sanderson-led Niagara Falls Flyers and the Bobby Orr-led Oshawa Generals to showcase their up and coming talent. Winning that night was not Sanderson’s agenda; enticing Orr into a brawl was. The scouts and the fans took note. A year later the two budding superstars were teammates on the Bruins.

Playing with the Bruins in 1967-68, he scored 24 goals with 25 assists and won the Calder Trophy as Rookie of the Year.

Despite playing with a Hall-of Fame lineup in Bobby Orr, Phil Esposito, Gerry Cheevers and Ed Westfall, Turk became a fan favorite and to many the most exciting player on the ice; with him on the ice you never knew what would happen next.

Those early years in Boston were the apex of his life. Fame and fortune had come his way. He drove a silver Rolls Royce, owned a nightclub, Bachelors Three, in New York and Boston in partnership with Joe Namath and could make quite an entrance with his full-length mink coat and a new blonde on his arm every night.

Probably the most famous goal in hockey history is the winning tally in the 1970 Bruins Stanley Cup final game. The image of Bobby Orr flying though the air after whipping the puck past St. Louis goalie Glenn Hall in indelibly etched in the minds of most hockey fans, Bruin supporter or not. That perfect pass, zipped from behind the goal line that set Orr up, was from Derek Sanderson. “I made the kid famous,” he joked."