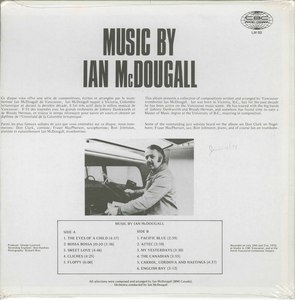 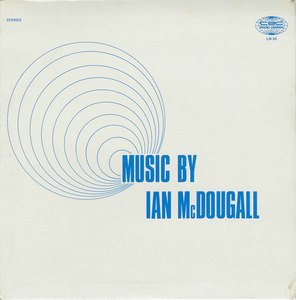 Canadian trombonist Ian McDougall is perhaps best known for his work with Rob McConnell's Boss Brass – Ian was lead trombone and soloist for twenty years. He was also a founding member, soloist, lead trombone, and arranger for the Brass Connection. His compositions and arrangements in both jazz and classical idioms are performed internationally. Ian now resides in Victoria, BC, where he performs regularly with his quartet and sextet, and is also busy teaching and writing.

Ian McDougall was born in Calgary, Canada, and grew up in Victoria, leaving there in 1960 to tour in Great Britain with the John Dankworth Band. He returned to Canada in 1962 and began a lengthy career as a freelance player, composer and arranger in Vancouver and in Toronto where, until 1991, he was also the lead and solo trombonist with Rob McConnell's Juno and Grammy award-winning Boss Brass.

Two suites composed by Ian have been recorded by that group – The Pellet Suite (The Boss Brass Again, UMB GEN1-12), and The Blue Serge Suit(e) (Brassy and Sassy, Concord Jazz, CCD 4508). Ian also was lead trombone and composer/arranger for The Brass Connection, who won the Juno award for best Jazz album in 1982. Since the early 1980's McDougall has become even more involved in composition, and his works have been performed by the CBC Vancouver Orchestra, the Lafayette String Quartet, the Toronto Symphony Orchestra, the Rob McConnell Tentet, and the Toronto Cantata Chorus,among others.

Ian now resides in Victoria, where he continues to play, compose, and teach. He taught trombone, composition, and jazz studies at the University of Victoria, leaving there in 2003 as Professor Emeritus. Ian was awarded the University of Victoria's "Distinguished Alumni" award in 2004. The past decade has included tours in Canada and abroad, both as a soloist and with his groups, to Ireland, Scotland, Australia, Denmark, Holland, the USA, Germany, and England, where Ian was music director for two BBC Big Band broadcasts.

Over the years, Ian has been invited to be a performer and clinician at three International Trombone Association conventions, in Nashville, Rochester, and in Las Vegas. Also, in the past decade, Ian has been featured as leader on six CDs. His latest double CD is entitled "In a Sentimental Mood," and features the music of Billy Strayhorn and Duke Ellington with Ian joined by his quartet.