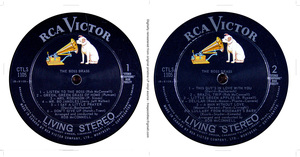 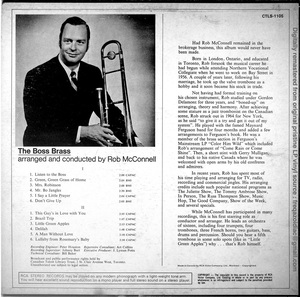 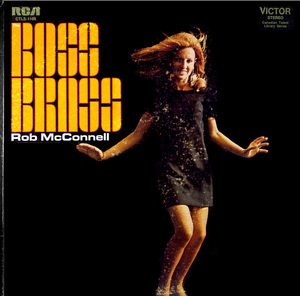 Had Rob McConnell remained in the brokerage business, this album would never have been made.

Born in London, Ontario, and educated in Toronto, Rob forsook the musical career he had begun while attending Northern Vocational Collegiate when he went to work on Bay Street in 1956. A couple of years later, following his marriage, he took up the valve trombone as a hobby and it soon became his stock in trade.

Not having had formal training on his chosen instrument, Rob studied under Gordon Delamont for three years, and "boned-up" on arranging, theory and harmony. After achieving some stature as a jazz trombonist on the Canadian scene, Rob struck out in 1964 for New York, as he said "to give it a try and get it out of my system". He played with the famed Maynard Ferguson band for four months and added a few arrangements to Ferguson's book. He was a member of the brass section in Ferguson's Mainstream LP "Color Him Wild" which included Rob's arrangement of "Come Rain or Come Shine". Then, a short stint with Gerry Mulligan, and back to his native Canada where he was welcomed with open arms by his old confreres and admirers.

In recent years, Rob has spent most of his time playing and arranging for TV, radio, recording and commercial jingles. His arranging credits include such popular national programs as The Juliette Show, The Tommy Ambrose Show, In Person, The Russ Thompson Show, Music Hop, The Good Company, Show of the Week, and several specials.

While McConnell has participated in many recordings, this is his first starring role as conductor and arranger. He leads an orchestra of sixteen, including four trumpets, four trombones, three French horns, two guitars, bass, drums and percussion. Should you hear a fifth trombone in some solo spots (like in "Little Green Apples") why ... that's Rob himself.

Arranged and conducted by Rob McConnell