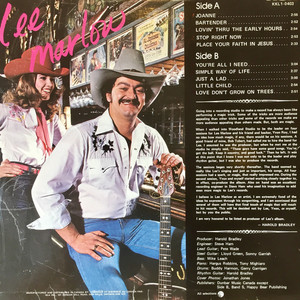 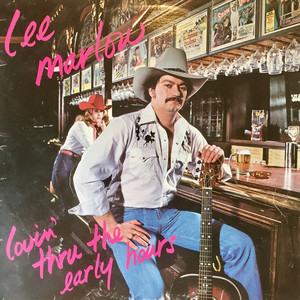 Lovin' Through the Early Hours

In his early childhood years Leo Cormier taught himself how to play guitar, and by age 15 was heading-up his own band playing local festivals, fairs and clubs. After several years of honing his singing and songwriting talents Leo Cormier was 'discovered' at a club date by entrepreneur Yvon Roy, who soon inspired Leo to take his talents to a bigger stage. With a name change to Lee Marlow, the formation of the top-notch back-up band "Calico", and a bunch of original songs Lee Marlow's career was launched. In October, 1980 Lee Marlow was in Nashville recording his first album with famed Harold Bradley handling production.

The debut album,"Lovin' Thru The Early Hours" was released in Canada on RCA (KKL1-0403) and featured his signature hit song "Joanne" (a song written for his wife), and the title track tune which became a Top 10 hit on Canadian charts in 1981. A follow-up album "Too Long Gone", also produced in Nashville by Harold Bradley was released in 1982 on RCA (KKL1-0442); and a third album "Temptation" RCA-KKL1-0546) came in 1984, this one produced in Toronto studios by Mike 'Pepe' Francis.

Lee Marlow charted 11 singles, all on RCA, from his three early 80's albums. With the exception of the first two singles, "Joanne" and "Lovin' Thru The Early Hours", all of the other singles failed to crack the Top 30 on Canadian charts.

During the height of his recording career Lee Marlow was busy touring across the Canadian Maritimes and Ontario venues, and made appearances on numerous radio and TV programs. His signature song "Joanne" was also featured on the 1982 K-Tel Compilation album "Denim Country" (WC-357); and he was twice nominated for Country Male Vocalist in the 1982 and 1983 Juno Awards.

After dropping out of the national spotlight in the late 1980's Lee Marlow continued to perform in his native New Brunswick.