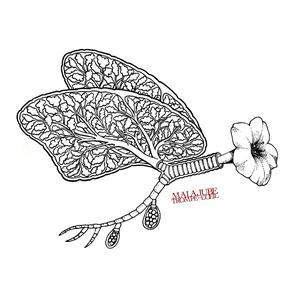 On October 17, 2006, Malajube released their CD Trompe-l'œil in the U.S. They also participated in the CMJ Music Marathon in New York City on November 2, 2006. In 2007 they did a Take-Away Show acoustic video session shot by Vincent Moon.

The band's song "Montréal -40°C" was featured in a Rogers Wireless commercial, and another song, "Ton plat favori", was in a Zellers commercial. "Pâte filo" was also featured in a commercial for RadioShack in the United States. Regarding the French lyrics, Augustin said in an interview: "I am sure the language, even if we say 'yeah., people from the states are interested in French music We are exportable,' which is something I hear a lot, it would still be difficult to understand that. We have a chance with Malajube, because people get the music. Even if it is in French and people don't get the lyrics, the music does the work. It talks to people." When asked if Malajube find it odd to play a show to an English speaking crowd and have people singing along who have no idea what they’re singing, Cournoyer said: "Yes, it’s very funny. But wherever we go, there always seems to be a couple of Québecers in the crowd, who teach other people."