Maiste, Art - At the Piano 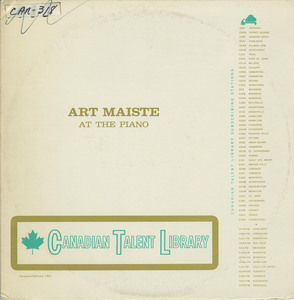 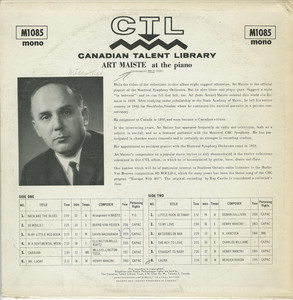 This LP by Art Maiste is one of the better attempts at a crossover between classical and jazz.

Armas Maiste was born in Tallinn, Estonia, 9 March 1929, became a naturalized Canadian in 1965.

After early study at the State Academy of Music in Estonia and six years at the State Academy in Stockholm (where he developed his interest in jazz), Maiste moved to Montreal in 1950. There, until 1983, his career included nightclub engagements as a soloist and as an accompanist to Sammy Davis, Jr, Joyce Hahn (to whom he was married during the mid-1950s), Carmen Miranda, and others, as well as concert, radio, and TV performances in classical, contemporary music, jazz, and variety programs. He served 1958-83 as the orchestral pianist with the MSO and continued to appear until 1986 on the orchestra’s recordings.

Maiste appeared at the 1971 Montreux Jazz Festival, at the 1973 EBU-sponsored festival in Oslo, and, as a member of the RCI-sponsored ‘All-Star Jazz Sextet,’ at the 1979 Bracknell, North Sea, and Montreux jazz festivals. He taught 1974-83 at McGill University and then took a position at Humber College in Toronto in 1984. He has also taught at the RCMT. His pupils have included the jazz pianists Luc Beaugrand, James Gelfand, Steve Holt, and Dave Restivo. Clearly a musician of remarkable versatility, Maiste has demonstrated his stylistic proficiency and technical assurance on the LPs Bach and the Blues and Pianostyles. For the latter he played in the manner of jazz pianists as diverse as James P. Johnson, Bud Powell, Erroll Garner, and Bill Evans.