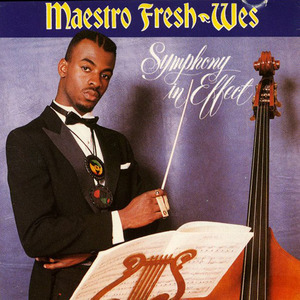 Symphony in Effect is the debut album of Canadian rapper Maestro Fresh-Wes, released in 1989 on Attic/LMR Records. In Canada, the album nearly went double platinum and remains one of the best-selling Canadian hip hop albums of all time. The first single "Let Your Backbone Slide" became the first hit single in Canadian hip hop history, appearing on Billboard's Hot Rap Singles chart. A second single, "Drop the Needle", was released in 1990.

After making his radio debut on Toronto's CKLN in 1983, Maestro formed the Vision Crew with Ebony MC. The duo opened for hip-hop acts such as Public Enemy, Ice-T, and Beastie Boys before breaking up in 1987. Originally known as Melody MC, he changed his alias to Maestro Fresh-Wes in 1988 and released the independent demos You Can't Stop Us Now and "I'm Showin' You", which featured his new DJ, LTD. The next year, he performed at the New Music Seminar in New York City, where he walked away with a record deal with independent label LeFrak-Moelis Records (LMR). Later that year, he released Symphony in Effect which included "I'm Showin' You" and "Just Swingin'", featuring his friend Ebony MC. Maestro's manager Farley Flex also made an appearance on the track "LTD's on the Wheel(s) of Fortune".

The album was successful in Canada, with 190,000 copies sold, nearly going double platinum. It peaked at #4 on Canada's RPM Albums Chart. RapReviews.com gave it a 7/10 rating, stating "Maestro Fresh-Wes was exactly the right rapper to put Canadian hip-hop on the map." The album won the first Juno Award for Rap Recording of the Year in 1991.
-Wikipedia