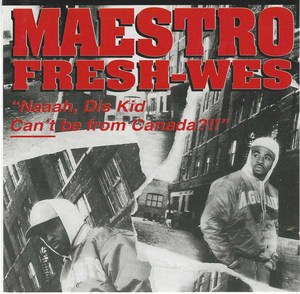 An examination of USA-Canada relations would without a doubt reveal a lot of interesting aspects, but to stick to the world of entertainment, it's remarkable how many Canadians have become superstars in the States. Michael Moore isn't the only one to admire Canada's achievements, as the careers of William Shatner, Donald Sutherland, Michael J. Fox, Dan Aykroyd, John Candy, Mike Myers, Jim Carrey, Keanu Reeves, Kim Cattrall, Leonard Cohen, Neil Young, Paul Anka, Celine Dion, Shania Twain, Nickelback, Nelly Furtado, Avril Lavigne, and last but certainly not least Pamela Anderson indicate. Canadian hip-hoppers are not only light years away from joining North America's top celebrity guild, they struggle to be accepted as equals by the hip-hop community south of the border. Some, such as Kardinal Offishall, Choclair, Swollen Members, Rascalz, K-Cut, Sir Scratch, Saukrates, Buck 65, or Marco Polo, have managed to temporarily set foot on US hip-hop territory; some, like Dream Warriors or K-Os, have even been able to cross over on a small international scale.

With a comparatively small domestic market, Canadian rappers do well to try to make a name for themselves where the woods may not be as thick but where the grass is definitely greener from a financial perspective. Toronto rap pioneer Maestro Fresh-Wes went as far as relocating to New York in 1992 after having released two successful albums in Canada, 1989's "Symphony in Effect" and 1991's "The Black Tie Affair." But there is something about his New York album, the tellingly titled "Naaah, Dis Kid Can't Be From Canada?!!" that indicates that Fresh-Wes wasn't merely exploring business opportunities in the Big Apple, but that his stay in the birthplace of hip-hop was a quest for respect. The personel is limited, but it speaks volumes. Production and raps from Showbiz and a rare appearance from Rhyme Inspector Percee P suggest that Wes was looking to associate himself with the people who had been involved in releases like "Return of the Funky Man" or "Runaway Slave." In other words, musically this album easily files under Diggin' In The Crates.

Not one to doubt his own skills, Wesley Williams produces 10 tracks himself, continuing the cleaner, jazzy sound of "The Black Tie Affair" and at the same time updating it with a bit of that DITC grit. He expresses his gratitude towards Show on the first track, giving "props to the brother that made the 'Soul Clap' / cause when labels gave me flack money had my back." Elsewhere he name-checks Black Moon, GangStarr, Mobb Deep, Redman, Lord Finesse, Big L, "Masta Ace, Hieroglyphics, and all you muthafuckas that's nice." Released in 1994 but reflecting a 1993 frame of mind, "Naaah..." is anything but a commercial album, and as such cannot really be compared to the rapper's previous efforts which held their share of mass-marketable music. This was one for the heads. As Maes declared on "Certs wid out Da Retsyn," "Just pass the microphone, fuck the light show; real rap is in effect." No more 'conductin' thangs,' no more 'private symphonies.' Gone was the tuxedo, replaced by a hoodie.

The backlash against pop rap was still in effect, and Fresh-Wes was as consumed by it as the average New Yorker MC: "Wack muthafuckas are blockin' the top 10 / while the black radio jocks spin / the calmer vibe, the modified / I like the harder side." With the exception of the slow jam "Private Symphony," Maestro's music had never been explicitly 'soft,' but he had come up in an era when a large section of rap was dance music. With hip-hop socializing equaling passing blunts and nodding heads in unison, in the early '90s danceability had become an attribute of the past. In the case of Maestro Fresh- Wes, nothing illustrates this better than "Bring it On." The original had been a jazz-tinged ditty free of profanity that according to the MC had party people talk to their "feet and say, 'Don't fail me now.'" The Showbiz-produced remix included on this album is much harder and meaner, relentless machine gunfire drums providing covering fire while Maestro takes 'em to war, throwing the n word around without a care, coming up with elaborate dickriding similes and just generally upping the lyrical ante:

"My poetry is black like Jesus
You niggas can't see this, my metaphorical thesis breezes
past all you niggas with your silly shitty poems
You're faker than a hoe with titties filled with silicone"

In a way, "Naaah, Dis Kid Can't Be From Canada?!!" can be compared to Big Daddy Kane's "Looks Like a Job For..." album from the same year. Both rappers possess an authorative flow and always stood for lyrical skills, but at the same time projected the image of a man about town. Both are also would-be comedians with a flair for vivid langauge. Their 1994 releases saw them adopt a rougher edge compared to the immediate predecessors, while maintaining the qualities that originally made them. Even as an underground rapper, Maes didn't stop seeing himself as a sex symbol ("Stunts take my album cover straight to the bathroom") and filled his record with (moderately explicit) sexual boasts. Another predilection he shared with Kane were the pop culture references. From the cast of _Facts of Life_ to adult star Dominique Simone, if you're famous, Maestro might just put you in a verse, just like he throws "Billy in the Ocean" and kicks "Joan in the River."

The urge to keep rhyming, however, proves to be a constant distraction for Fresh-Wes (as for so many MC's). He tends to get off track, trying to cram yet another internal rhyme into a line. Maes' biggest asset on "Naaah..." (aside from the beats) is therefore his flow, which is one of the smoothest yet most animated in memory, arguably enhanced by the impressive rhyming efforts, the clear diction, and the mellow baritone. The combination of which sounds so sophisticated, it makes statements seem articulate even if they aren't. So a lot of times you'll just be content with listening to his effortlessly delivered lyrical tour de force, for example on the irresistible neck exercise that is "Check My Vernacular":

"My rhymes are stingin' like a killer bee
My competition are wishin' they're killin' me
for my similes and soliloquies
(...)
On your Technics Wes speaks
over the best beats, Fresh into the next week
(...)
My body is my temple, my brain is my nucleus
A great example of Allah's perfection
You're movin' to the sounds of my fat selection
I'm simply spectacular, smooth like an Acura
Yo, check my vernacular
(...)
Do rap a favor, be a waver in the front row where the stunts go
Cause you chumps know you can't flow, plus you're too gung-ho
(...)
I'm smoother than the philharmonics with my killer phonics
and melodics; shit, I'm fuckin' iller than a fill of chronic
(...)
Seen many thesauruses, plenty clitorises
Ready to score with this, pack a punch like Terry Norris's"

Conceptually, the opening "I'm Drinkin' Milk Now" revolves around artistic growth. After that it's mostly "crazy rhymes of spontaneity." The melodic "Certs wid out Da Retsyn" recalls Diamond's production for "Stunts, Blunts & Hip-Hop" while Maes pops the rhetorical question "I don't know - is it just me or am I really that fuckin' ill?" "How Many Styles" is the East Coast equivalent of a Cypress Hill track, with dark bass tones, shrieking horns and busy percussion, the aggressive hook mirroring Wes' acerbic wit spilling over in the threat "Your radio stations thump me / You shoulda never let my ass in your country / Word to God, I'm real hard / I'm even deadlier than Tony Montana with a green card."

Surely Showbiz didn't regret hooking up with this crazy Canuck. "Mic Mechanism" is an anthemic jam with heavy drums, prerequisite horns and crowd participation. "Fine Tune Da Mic" sees Show and Wes trading verses over even heavier drums and some more horns. The CD bonus "Make it for the Ruff" would be at home on any Show & AG record and solidifies the Maestro's battling ("I never made a movie in my life / but if Wesley Snipes, he guaranteed to take your life") and bragging stats ("I can't sing like Boyz II Men or Jodeci / but women take a shower when they get off the phone with me"). The album's only other collaborator, Percee P, astounds as usual with his rapid-fire flow and stellar rhyming skills on "Pray to Da East." Fresh-Wes tries his best to keep up, and while he inevitably sounds slower in comparison, he comes correct lyrically and especially with the self- produced track, a roaring, hell-raising stormer, earning himself the right to conclude, "I'm extra-nice, who's next to slice? / Before you step to Maes, nigga, check with Christ."

Briefly revisiting the more socio-political themes of "The Black Tie Affair," Fresh-Wes conceives "Higher Level," where the Commonwealth citizen remembers coming face to face with his majesty: "I even met Queen Elizabeth / (You didn't bow, did you Maestro?) Money, don't be ridiculous / That's some silly shit, you know she ain't significant / I only gotta bow to Allah the Benificent." "Makin' Records" provides the obligatory commentary on the music business including an especially compelling verse about female singers ("You think you got it bad, girls got it the harder way / Labels love to see a black woman in lingerie"). In the middle of flexing his "uncategorical, metaphorical flow," Maestro Fresh-Wes also pens the ultimate tongue-in-cheek tribute to independent black women, "Brown Sugar," a masterpiece that would make his generation's greatest rap songwriters jealous.

"First we take Manhattan, then we take Berlin," Leonard Cohen foretold in 1988 in his hit "First We Take Manhattan." Where Cohen may have succeeded, Wes Williams clearly failed, even if his aim wasn't to take Manhattan, but to find the approval of the hip-hop constituencies in all five boroughs. So perhaps at eye level Maes' skills were recognized. At the very least he was able to convince this hip-hop fan. Over the years, "Naaah, Dis Kid Can't Be From Canada?!!" has become somewhat of a personal favorite, probably cracking my top 100. Like Wes, I feel that in hip-hop "freshness is next to godliness," and if I had to sum this album up in one word, fresh it would be.