Lund, Corb Band - Hair in My Eyes Like a Highland Steer 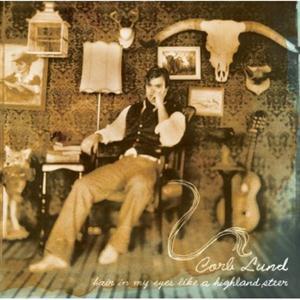 chosen by the Canadian Country Music Association as "Album Of The Year" for 2006, Hair In My Eyes Like A Highland Steer is a delightful album. It is an album that deserves a place on the radio in the USA. There aren't many singers who sing the kind of roots rock and country hybrid that Corb Lund, also the winner of the CCMA's "Roots Artist Of The Year" award, sings.

Canadian singer/songwriter Corb Lund has built a steady following throughout his career and is now at the point where he is releasing his first record in the United States. Released through Stony Plain Records, Hair In My Eyes Like A Highland Steer is an interesting roots/rock effort. The title track leads off the record and instantly sets the tone for the album. Backed by some rootsy electric guitars and searing fiddles Corb sings the song in a style that isn't often heard on mainstream country radio. "The Truck Got Stuck" is a humorous tale of what happens when trucks get stuck on a muddy farm. Ramblin' Jack Elliot, A western and folk music icon, supplies guest vocals on the reprise of this song at the end of the CD.

"Always Keep An Edge On Your Knife" is a classic sounding story song. Backed by rootsy instruments like the fiddle, the mandolin and the banjo, Corb sings (and yodels) about the words of wisdom his father and his grandfather taught him as he grew up. Canadian country music legend Ian Tyson guests on the Chris LeDoux-like ballad "The Rodeo's Over." It's a somber fiddle-filled track that shows off these two fine vocalists.

With its rockabilly swagger, "Hurtin' Albertan" is basically a Canadian "Convoy." It's all about truckers driving through Canada. "Big Butch Bass Bull Fiddle" is a fun song with cute verses. "All I Wanna Do Is Play Cards" is a really humorous song that would make Waylon proud. It is a story about a guy who is addicted to any kind of card playing. If there were any song from this record that could be played on US country radio, it'd be "The Truth Comes Out." However, with a lyric that discusses all that's bad about the loss of the true wilderness and wildlife, the chances are slim. The melody and music of the track is just haunting.

"Counterfeiter's Blues" features some really good electric slide guitar that reminds me of Ben Harper and Robert Randolph. This is just a fine piece of blues/rock. "Good Copenhagen" proclaims that fresh snuff is "better than bad cocaine." The melody and vocal given here also remind me of Waylon Jennings. "Trouble In The Country" is a song that discusses murder in the country with a melody that recalls 1970's rock, while "Little Foothills Heaven" finds Corb singing about life on his farm and how he enjoys his life there.

Corb Lund's Hair In My Eyes Like A Highland Steer is an enjoyable record. It's the kind of record that won't break into the mainstream but could be a cherished addition to any collection. This is a record that certainly adds a little more variety to my collection of country music albums
-Matt Bjorke