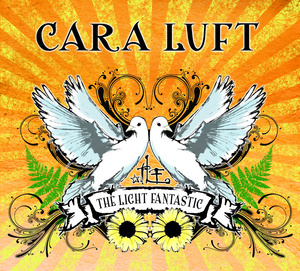 Cara Luft is a dynamic performer with deep roots in both folk and rock n roll, who got her start at age four playing autoharp and dulcimer in her family's band. Raised by folk-musician parents in the heart of the extensive and passionate traditional music community in Calgary, she was steeped as a youth in a setting of spiritual music, house concerts, folk clubs and festivals. A whole new world opened up when her parents gave her an acoustic guitar and she discovered Led Zeppelin.

An extremely accomplished guitarist and captivating singer, Cara is a highly acclaimed solo performer, her shows flowing with engaging, witty stories and powerful original and traditional songs. Her vibrant delivery and rock solid confidence make her a joy to behold in live performance. Luft is clearly at home on the stage and she invites her audience into her world with a confidence and humility that is both rare and endlessly appealing. Cara's first full-length album, Tempting the Storm (recorded in 2000) was nominated for a Prairie Music Award for Outstanding Roots Recording. In early 2002 she co-founded the group The Wailin Jennys. Recording and touring with the band for three years, Cara was the spark behind the Jennys and pivotal in the development of their Juno-Award winning album 40 Days (Best Roots Recording). Her spirit and innate musicianship were instrumental in the group's rise to the forefront of the Canadian roots music scene. She left the trio to return to her own writing and solo career, recording and mixing her new album The Light Fantastic between February and April 2006.

Assembling a cast of characters from some of Canada's top folk and rock groups including producer Neil Osborne (54-40), multi-instrumentalist Hugh McMillan (Spirit of the West, James Keelaghan), violist/fiddler Richard Moody (The Bills), Winnipeg session drummer/percussionist Christian Dugas (Madrigaia, Alana Levandoski), and mix engineer Warne Livesey (Matthew Good, Midnight Oil, The The) Cara's new album is a cornucopia of sonic delight. Her large and dedicated legion of fans eagerly awaits this newest creation. A bit of Carole King meets early Zeppelin with a dash of Sigur Ros, and songs ranging from country (There's a Train) to folk (Wilcox), roots rock (Falling Away) and traditional (Black Water Side), with a modern spiritual (Jerusalem), The Light Fantastic is a crossover album with excellent airplay potential. Her original songs are underpinned and anchored by finely honed evocative lyrics, the entire album replete with deft musicianship and sensitive, effective arrangements.

Cara Luft’s solo album recorded after her departure from The Wailin’ Jennys.
Produced by 54-40 frontman Neil Osborne.
Released in Canada by Black Hen Music and with CRS in Europe on March 27, 2007.