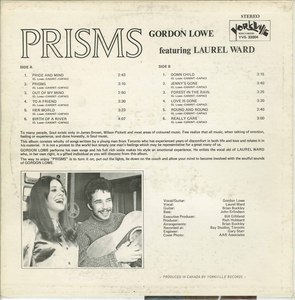 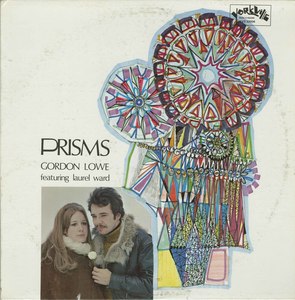 This album, described as 'mournful folk' has become a cult classic in Japan and Korea. Laurel went onto sing background vocals for Anne Murray, Myles and Lenny, Bob Seger and Alice Cooper. Gordon Lowe recorded another gem with Laurel Ward, Brian Buckley, John Erlendson et al in Philadelphia in 1970 entitled Follow the Sound, on the North Bay label. He opened for the Doors in Boston. Both albums were re-issued by Media Arte in Korea in 2012 in a limited press runs of 300 copies each. http://mocm.ca/Music/Title.aspx?TitleId=317424

To many people, Soul exists only in James Brown, Wilson Pickett and most areas of coloured music. Few realize that all music, when talking of emotion, feeling or experience, and done honestly, is Soul music.

This album consists wholly of songs written by a young man from Toronto who has experienced years of discomfort in both life and love and relates it in his material. It is not a protest to the world but simply one man’s feelings which may be representative for a great many of us.

GORDON LOWE performs his own songs and his full rich voice makes his style an emotional experience. He enlists the vocal aid of LAUREL WARD who, in her own right, is a gifted individual as you will discover from this album.

The way to enjoy “PRISMS” is to turn it on, put out the lights, lie down on the couch and allow your mind to become involved with the soulful sounds of GORDON LOWE.”…

This beautiful music was the soundtrack to those magical "times". Still very beautiful.