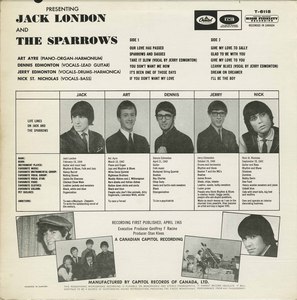 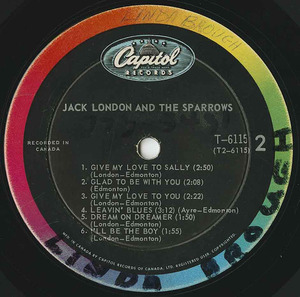 Jack London And The Sparrows-ST LABEL 02 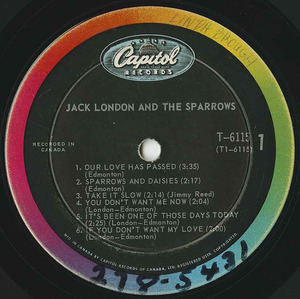 Jack London And The Sparrows-ST LABEL 01 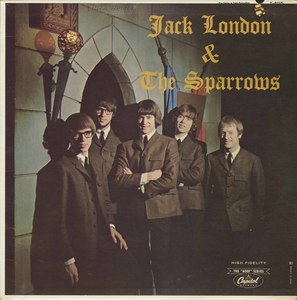 Jack London & The Sparrows were formed in Oshawa, Ontario in 1964 and this incarnation of the band featured Jack London (born Feb 16, 1944 in London, England) on guitar and vocal lead; Dennis Edmonton (born April 21, 1943 in Oshawa, Ontario) on vocals and guitar; Jerry Edmonton (born October 24th, 1946 in Oshawa, Ontario) on vocals, drums and harmonica; Art Ayre (born March 18, 1942 in Toronto, Ontario) on piano, organ and harmonium; Nick St. Nicholas (born September 28th, 1943 in Hamburg, Germany) on guitar, bass and vocals. John Kay would later join the band and together they formed Sparrow and went on to form Steppenwolf sans Art Ayre, Jack London, and Dennis Edmonton (Mars Bonfire). But together, they had some chart success with this album as well as 4 singles on the Capitol label and one single on RCA Victor. This album was recorded in Canada and was released in April, 1965 on Capitol T-6115. The executive producer was Geoffrey F Racine. It was produced by Stan Klees. The album is one of the rarer Capitol 6000 series releases and is hard to find a clean copy.