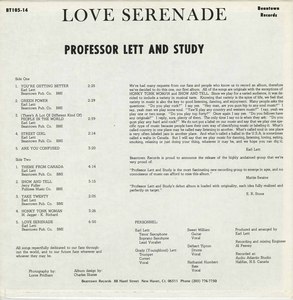 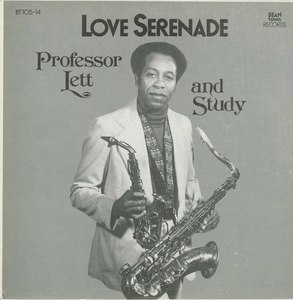 Earl Lett was born in 1945 and grew up in Monroeville, Alabama. He played the sax in Ike & Tinas Kings of Rhythm Band. Lett had won the spot in their band by chance when a musician in a barbershop told him Turner was auditioning prospective members. He played for three minutes and he said "You're the Man I'm looking for". Earl played on their live recording in Carnegie Hall "What You Hear is What You Get". He also was in their movie "Soul to Soul". He left Ike and Tina's band and studied sax for a while at the Berkeley School of Music in Boston.

The Professor then headed to Nova Scotia for a few years and got a band together. He recorded this album at Audio Atlantic Studio in Halifax, Nova Scotia in 1973 on Beantown Records BT105-14, a Boston record label.

The album Love Serenade features Earl Lett on tenor saxophone, soprano saxophone and lead vocalist; Sweet William on guitar and vocals; Grady (Youngblood) Lett on trumpet, cornet and vocals; Delbert Tipton on drums and vocals; and Nathaniel Humbert on bass and vocals. The album was produced and arranged by Earl Lett. Recording and mixing was by Al Feeney. The photograph was taken by Lorne Pridham. The album design was by Charles Shates.

While not technically a Canadian, Earl Lett is included here as an honourary Canadian since he recorded his finest material while touring the eastern provinces in Canada. In the years after recording this album, Earl Lett began playing more and more country music, became known as "Florida Bill" and was known as one of the few saxophonists in country music.
-Robert Williston