Lawson, Floyd and the Heart of Stone - "Coming Out" 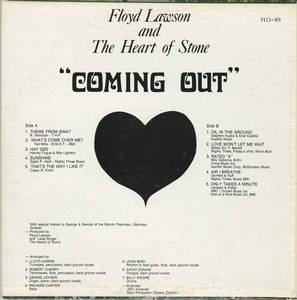 Floyd Lawson and the Heart of Stone - Coming Out 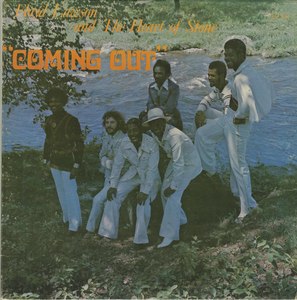 Very rare self-produced Canadian West Indies uptempo funk. This, their second album, received only limited regional distribution in the Ottawa area. The grooves here are heavily influenced by the mid 70's soul scene, and although the harmonies still get a fair bit of focus, the rhythms do too, and a number of the cuts here have a tight funky sound that's quite different than the group's sweeter soul from before. The instrumentation is quite strong overall played in an ensemble mode with echoes of New York and Miami funk, particularly the more upbeat mode of the latter half of the 70's. 'Hay Gee' is a storming funk cover from the Nite Liters; 'Only Takes a Minute' is crossover soul beauty; "Air I Breathe" is a superb 70 soul stomper; "Rated X" is a deep funk instrumental stormer capable to set every dancefloors on fire. Throughout this classic recording, Floyd Lawson delivers his timeless vocals with a unique and soulful approach, accomplishing the virtues one would attribute to the likes of Marvin Gaye and Curtis Mayfield.

In 1959, Floyd began his singing career alongside his brothers and cousins with their local church's gospel choir. He quickly learned to combine soul and faith into one, and how to deeply connect with his audiences.

In the early 1960's, he moved to Florida where he formed "The Larks" alongside his good friends John Myers, Rudolph Hill, Lindsey Griffin, and Clemmons Daniels. Together they gained confidence as performers, and perfected their skills throughout various live appearances and club gigs.

By 1964, the group had evolved into "The 4 Pennies" (Lawson, Myers, Griffin, with the addition of Carl Cuttler) and recorded at Brunswick Studios in Detroit.

This brought them their first two successful 45's "You Have No Time to Lose b/w You're a Gas With Your Trash" in December of 1966, and "Tis The Season b/w Shake a Hand" in May of 1967, both of which earned them the reputation they deserved.

In 1970, "the 4 Pennies" changed their stage name to "The Hearts of Stone" and recorded a series of singles & a full-length album with Motown Records' VIP subsidiary.

Although the Hearts of Stone's - "Stop The World: We Wanna Get Off" stood out as a promising album, all promotional efforts were halted after the band refused to sign a managerial contract with the label.

They then ventured on to successfully self-producing and promoting their act until 1982, at which point daily events drew the closing curtain for the group.

"The Hearts of Stone" have stood tall through trials and tribulations, and have proven themselves as an inspiration to us all. They have shown us that Time itself can't stop a great thing from being shared with all who are willing to listen.