k.d. lang - Angel With a Lariat 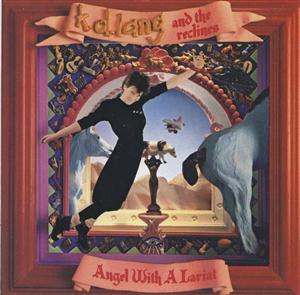 Angel With a Lariat

File ANGEL WITH A LARIAT next to Lyle Lovett's self-titled debut, Dwight Yoakam's GUITARS, CADILLACS, ETC., ETC. and Steve Earle's GUITAR TOWN. All four came out from 1986-1987 and were warning shots across the bow of a genre still recovering from the Urban Cowboy syndrome of the early '80s. Between her androgynous look and vegetarianism, Lang sent the most shock waves through Music Row's establishment.

Regardless of how she looked, LARIAT was a triumphant debut that found Lang & The Reclines updating Patsy Cline's sound when LeAnn Rimes was barely out of diapers. Producer Dave Edmunds oversaw this collection of Elvis-flavored rockabilly ("Tune Into My Wave") infectious stompers ("Turn Me Round"), high-flying kitsch ("Watch Your Step Polka") and countrypolitan ballads ("Diet Of Strange Places"). Although fiddle player Ben Mink's sound was closer to Mick Kaminski than Charlie Daniels, he nonetheless shone on material ranging from the raucous "Pay Dirt" to clip-cloppy "High Time For A Detour." Lang's choice of covers is particularly noteworthy. She belts out Joe South's "Rose Garden," does a deft turn with the Tex-Mex of Johnny Horton's "Got The Bull By The Horns" and caresses the dickens out of Cline's slow burning "Three Cigarettes In An Ashtray."