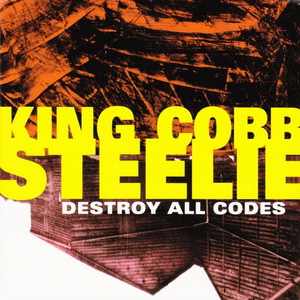 In the four-year gap since we last heard from King Cobb Steelie, the underground was overrun by dozens of descendents of Gang of Four’s punk/funk/disco, most of whose asses would easily have been whupped by KCS circa 1993. Ten years behind and ten years ahead of time doesn’t pay your bills, and it looked like 2000’s Mayday might have been their swansong. This comeback album could have capitalised on all that, but this is a band that has always moved forward. Hence, Destroy All Codes is their most minimal work to date, eschewing Kevan Byrne’s vocals and rock structures entirely. Instead, with long-time live drummer Sam Cino front in the mix with a great natural room sound, they’ve transformed themselves into a 21st century version of the Meters. There’s very little going on outside of the interplay between Cino and ace bassist Kevin Lynn, and what there is simply functions as an extension of the rhythm section, like the tiniest Afrobeat band in the world run through digital processing. The grooves are great, but mostly identical in tone and tempo, and one can’t help but wish for a few extra toppings and even more of percussionist Mike Armstrong. The nine-minute ambient dub closer "Bad Information” is the highlight, for both its textures and for sheer variety. The Straggler is a solo project for KCS’s Kevin Lynn, and it’s markedly denser than his day job these days. Lynn successfully balances warm-sounding live playing (including drums from former Steelie Nathan Lawr) with an otherwise chilly urban musical landscape, which on tracks like "Thermostat” sounds like a paranoid sci-fi nightmare of stalking robots. The Straggler is at times much more abrasive than KCS ever was, but there are moments of exquisite beauty as well. Like KCS, he too closes on an ambient note, but in this case it’s more in line with Kranky Records’ somnambulance. The only bitter taste is that, as with most noteworthy solo projects, one can’t help but wish that this material was somehow incorporated into the main project.
-Michael Barclay, Jan 01, 2006, Exlcaim