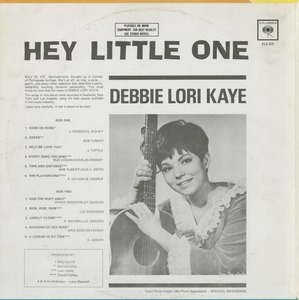 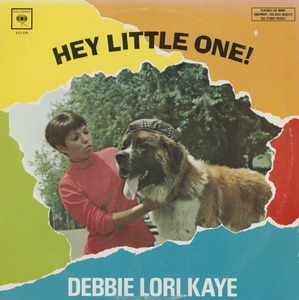 Deborah Kaye was a diminutive singer and guitarist with a large voice who was born in New York, but grew up in Sault Ste. Marie, Ontario. Her father was a disc jockey at CKCY and asked a local group, (Those) Rogues, to allow her to sing in the band. She and the band toured around Southern Ontario for nearly a year until she left to appear on the Tommy Hunter Show

Columbia Records took notice and signed the teenager to a long term deal. The country vocalist made her first showing on Canadian RPM Magazine charts with "Picking Up My Hat" in February 1965. It entered the Country singles chart at #1 on February 8 and stayed there until the week of August 23, 1965. It returned to number in December of that year until Columbia released her next single - a remake of The Shirelles' 1962 hit "Soldier Boy" - at Christmas time. She rode the RPM Top singles chart to the Top 20 with the song in 1966 and the song remained in the Top 40 for 10 months.

The Surfer's Cross is used by surfers as a talisman to distinguish the surfer from the rest of society. Its origins are in 1960s surf culture and the most common design is based on a German Iron Cross and features a surfer on a board in the middle of the front side of the cross. The German military decoration was co-opted because young surfers would wear their fathers' war trophies as an anti-establishment statement; eventually, the genuine Iron Cross was replaced by one manufactured for that purpose. The famous custom car designer Ed "Big Daddy" Roth sold various "surfer accessories" in the 1960s that were based on WW 2 German items, like his "surfer's helmet" that is a plastic copy of a German helmet and he also manufactured his own Surfer's Cross. By 1966 Roth claimed to have sold 51,800

Dear Robert,
.....I wanted to thank you for including me in the Canadian Museum of Artists.....Thanks again for making me part of History.....
Deb Kaye