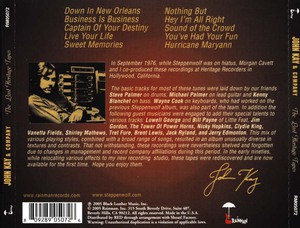 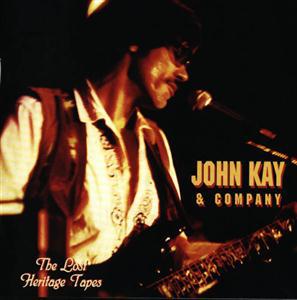 In 1976 Morgan Cavett and I produced these recordings, which were shelved and forgotten until the 90’s when they were rediscovered during the move to my new studio in Tennessee. Some of these songs were re-recorded in Muscle Shoals in ’78 on my “All In Good Time” album but with different musicians. What makes “Heritage Tapes” special to me is not only some of the previously unreleased material but also the contributions made by the fine musicians (Lowell George and Bill Payne of Little Feat, Nicky Hopkins, Jim Gordon, The Tower of Power Horns as well as Steppenwolf drummer Jerry Edmonton and others) several of whom are no long with us. Their mix of various styles combined with a broad range of songs resulted in this album of diverse musical textures and contrasts. Some of my favorites include “Business is Business,” “Captain of Your Destiny “,” Nothing But” and “Hurricane Maryann” among others.

1997—This John Kay solo release was recorded in 1976 but was shelved and forgotten due to changes in record label affiliation. It featured guest performances by Lowell George & Bill Payne (of Little Feat), Nicky Hopkins and the Tower of Power Horns, among others. A mix of various styles and a broad range of songs make this record unusually rich in musical textures and contrasts. Songs: Down In New Orleans, Business is Business, Captain of Your Destiny, Live Your Life, Sweet Memories, Nothing But, Hey I’m Alright, Sound Of The Crowd, You’ve Had Your Fun, Hurricane Maryann.