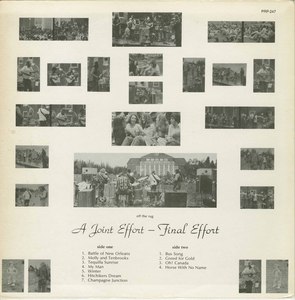 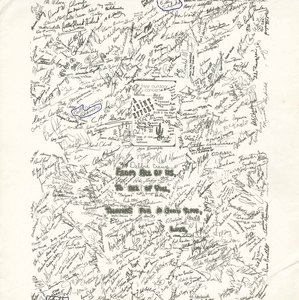 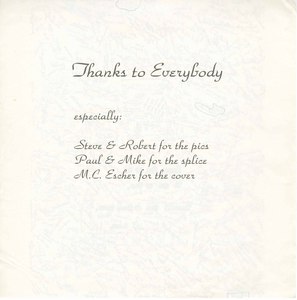 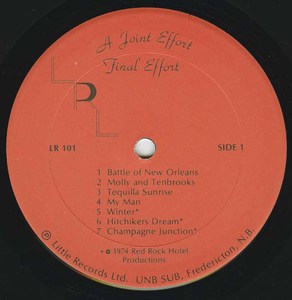 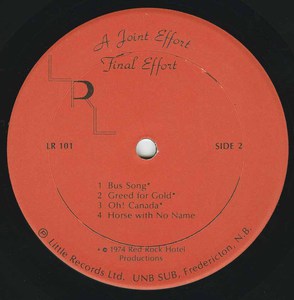 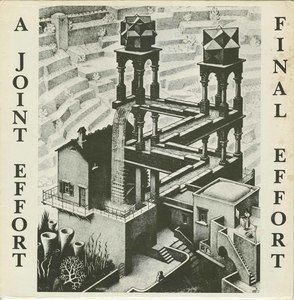 A Joint Effort is a very rare psych folk album which was released out of Fredericton, New Brunswick. It was released on Little Records Ltd. and Red Rock Hotel Productions out of the University of New Brunswick. Side one is a more light folk rock side and relies on decent cover tunes; side 2 sounds like a few local browns and some smoke were added to the equation, a bit more rock and garage sound with some fuzz guitar. Only 200 copies were pressed. It is a very rare and sought-after album in the collector market. Interesting take on Oh! Canada. Came with an insert with lyrics. copies have sold for as high as $600, depending on condition.

"There were at least two American bands of this name (see 'Fuzz, Acid And Flowers' for details) but this was a different Canadian outfit of whom little is known. Musically very diverse, the live album ranges from acapella (Battle Of New Orleans) through country rock (Molly And The Tenbrooks, Hitchhikers Dream, Champagne Junction) and even psych rock (Winter, Greed For Gold, which has some great guitar work). The album ends with their own more psychedelic speeded-up interpretation of America's Horse With No Name, which lapses into Jimi Hendrix's Purple Haze near the end and includes the obligatory drum solo, but here the original clearly wins out!"

Re-issued on Void on LP and Radioactive on CD.

Rick and Grant are still in Fredericton and still play together periodically. My brother Tim is near Oshawa and he and his wife breed, raise, and train English Setters and Canadian Horses. Brian is still playing bass with Rawlins Cross and whoever, and I am entering my 4th decade soon playing for a living and having done 7 or 8 albums on my own: http://www.terrytufts.com