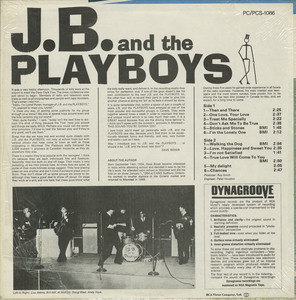 JB And The Playboys-ST BACK 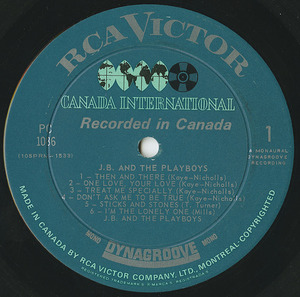 JB And The Playboys-ST LABEL 01 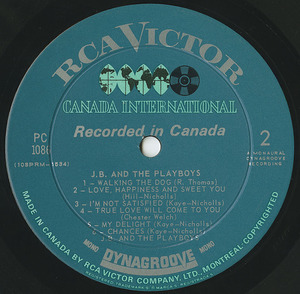 JB And The Playboys-ST LABEL 02 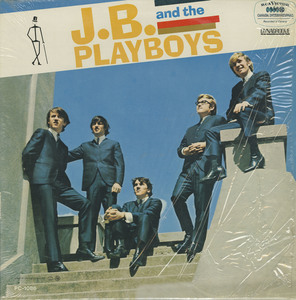 Montreals Beatles later moved to T.O. to form Jaybees then Carnival Connection. Pre-Freedom North beat. The band also cut a 1-sided LP of Coca-Cola jingles for the Hallmark label. also see Jaybees; Carnival Connection. Nicholls musical career started with Montreal's J.B. & The Playboys who established a firm reputation in the early 1960's in the local club scene playing Beatles cover tunes before The Beatles broke in North America because Nichols' aunt lived in England and sent him all the latest releases.

By 1965 they had been signed to RCA Records and released the song "Don't Ask Me To Be True". A string of successful singles followed on the charts through the spring of 1965 after which the band headed into RCA Studios to record the remaining tracks for their self-titled debut LP which was released in the summer of 1965. During that same summer they starred in the movie US Movies Inc. production of Maxwell Sendel's 'Playgirl Killer'.

With a May 1966 switch in name to The Jaybees (as they were being confused with Gary Lewis And The Playboys) and a move to Toronto, they continued with a string of successful singles including "I'm A Loner" peaking at #25 in August 1966, and "I Think Of Her" which hit #49 later that year. Kaye and Atkins would leave the band following this release and were replaced by Pete Carson and J.P.Lauzon who would immediately appear on their next single for Columbia Records "Who Do You Think You Are". Later that year The Jaybees would appear in a second film called "Waiting For Caroline" starring Alexandra Stewart.

Another brief name change they returned to RCA as Peter And The Pipers with the addition of Tim Forsythe. But they found themselves without a hit in the form of "Rockin' To Mars". By 1968 the music world had changed styles again and the remaining members (Hill, Nicholls and Lauzon) rebuilt itself under the moniker Carnival Connection releasing one unsuccessful single "Poster Man" (only hitting #67 in December 1968).

Nichols moved to New York to work on Broadway ('Hair' and 'Jesus Christ Superstar') before returning to Montreal to join a short-reformation of Mashmakhan in 1973, all the while working on solo material for several labels. In 1975 he packed up for Hollywood where he had parts in such movies as 'Nashville', 'Buffalo Bill', and 'Slapshot'. He later worked in movie production with Robert Altman and eventually moved into video production including directing Leonard Cohen's "I'm A Hotel" and working with Lorne Michaels on Saturday Night Live.